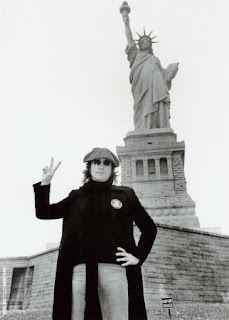 New York City has always been recognized as the setting (and instigator) of many important subcultures, social movements, and artistic revolutions. CBGB's was home to American punk; Washington Square Park fostered the Bohemians and Beats; the Lower East Side generated graffiti, hardcore, and underground hip-hop. The unifying factor of all movements, otherwise separated by time or topic, is not only the city itself, but all that it stands for. My great-grandparents, for example, came to America via Ellis Island, watching Ms. Liberty grow larger and larger as they approached a new home where they could have a better life.
New York has thus always represented independence, whether it be for those who immigrate here from other countries or for those who escape their suburban/rural lives in hopes of finding more like-minded people with whom to make something happen. And it's that idea of independence that really drives New Yorkers to create, compete, push forward, learn, speak, and change the world one little step at a time. Here, it seems like almost anything is possible, and nobody will judge you for expressing who you are (or at least, no one will spend an extra five seconds staring at you when there's something else to look at just a stone's throw away).
Of course, the NYC I'm talking about is not Wall Street, nor is it Park Ave. Naturally, people move here not only for creative freedom, opportunities and inspiration, but to make money and lead a wealthy lifestyle. So perhaps the NYC I speak of is particular to people who prize art and culture. In any event, an innovative and independent NYC is fading away and falling apart, especially lower Manhattan. Small businesses here are in danger...as is anyone who treasures them. While chain stores and restaurants do exist throughout the boroughs (and Times Square is one giant advertisement), NYC is also known for its independently owned stores, restaurants, and bars that you simply cannot find anywhere else. I mean, who goes to NYC to shop at Kmart and eat at Applebee's? Hopefully no one.
Now that rents are so high, small business owners can no longer afford to operate (so long CBGB's, etc.), which not only totally sucks for the people who put their heart and soul into them, but also for patrons who have made such places a part of their identity. Many shops, clubs, bars, cafes, and venues are NYC landmarks --- they define us and shape us and they are crucial to the neighborhoods in which they exist. So while having a Chase bank on every other block is...uhhh...helpful, what it's really doing is destroying what makes NYC unique, thus rendering it impossible for a new generation to discover and embrace independent businesses. All of this makes me very sad and angry. Why doesn't New York value, and attempt to save, its very own culture? 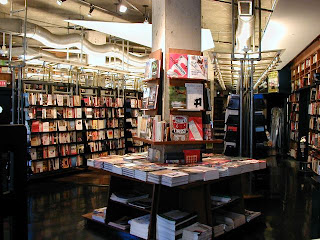 The plight that concerns me most right now is that of St. Mark's Bookshop. I cannot tell you how much this store means to me, and how much the continued demise of Saint Marks Place hurts! Recently, over 43,000 people (including me) signed a petition to get the store's landlords, of Cooper Union, to lower the monthly rent, but this appeal was just turned down.

Michael Moore visited the store this month and "spoke about how St. Mark’s is actually the price we are being asked to pay for Wall Street’s greed, and in recent weeks, members of Occupy Wall Street have made stops at the store to help rally against the landlords. Bookshop owners, Bob Contant and Terry McCoy, say that it remains to be seen if the recent surge in customer support will be enough to keep the bookshop’s doors open." >> Read more in this article.
Not only did we lose the massive chain Borders, but now cultural landmarks are next in line. Unlike Borders, these stores are irreplaceable; they foster community, expression, and independence. St. Mark's Books is both independently owned and carries many titles from indie publishers. Let's look at the facts:

Located at 31 Third Avenue between 8th and 9th Streets, we are convenient to the 6 Train at Astor Place and the N/R Trains at Broadway and 8th Street. Our neighborhood is home to New York University, The Cooper Union, and such cultural institutions as P.S. 122 and St. Mark's Church in the Bowery, which offer theatre, dance performances and poetry readings. There are also many vintage clothing stores, designer boutiques, import shops, antique stores, and new & used record stores in the area, as well as dozens of cafes, restaurants and bars. 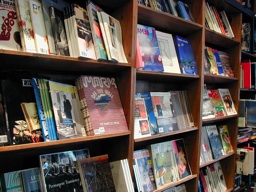 My plea to you is this: if you are in New York, buy a book there. If you know anyone in New York, ask them to buy one for you, or themselves. You can also buy a gift certificate for someone. I know Amazon is quick and easy, but try St. Mark's Bookshop first. Please...we all know where this is going. And don't neglect other indie bookstores like Bluestockings, McNally Jackson, the Strand, Book Book, etc. The alternative is not pretty...sitting inside all day alone and looking at things on screens. O what fun.
-a.d.
Posted by amy dupcak at 10:31 AM