Why I Hate Terminal 5 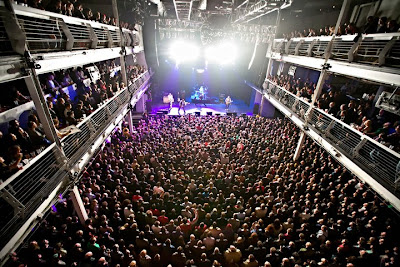 New York has some truly phenomenal music venues -- from the small and scruffy (like Lit) to the best of  ballrooms (like Hammerstein) to the d.i.y. (like Monster Island Basement) to the artsy and imaginative (like Glasslands and Goodbye Blue Monday). But, bigger bands aren't going to perform at Spike Hill or Cake Shop, so where do bands that need a space smaller than a stadium but larger than anywhere on the Lower East Side end up performing these days?
Well, ever since Terminal 5 opened in 2003 -- but mostly within the past few years -- bands like The Black Keys end up there. Unfortunately. This three-tiered venue is run by Bowery Presents, who seem to hold a monopoly over NYC concerts (they also run Webster Hall, Mercury Lounge, Music Hall of Williamsburg, The Wellmont Theater, and Bowery Ballroom). But, what's so bad about Terminal 5? I mean, I don't have a problem with the other venues I just mentioned, so why this one? Well, let me try to briefly explain in bullet point fashion.


Cons
1. As the above picture perfectly exemplifies, the space becomes entirely too crowded. Now, I have been to dozens and dozens of sold-out shows, and I have been in many a pit, but I don't usually feel as immobile and uncomfortably jam-packed as I do at Term-5, and I'm not even sure why that is. It might be because the occupancy number is exceptionally high. Or maybe because....
2. ....when you walk in, you travel down a long hall and then end up on the right side of the stage (rather than most venues, where you're facing the stage), which makes for an awkward and difficult time trying to move in and get a spot. If you happen to arrive on the late side, you're pretty much guaranteed to hit a major roadblock of people as you attempt to squeeze your way in. So you paid anywhere from 25-65 bucks, and now you can hardly see the stage. Also, if you are... 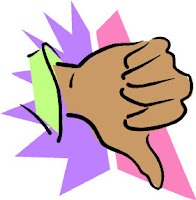 3. ...short like I am, you won't see much anyway. Again, this happens in other venues, but for some reason it's particularly bad at Term-5. Maybe the stage is too low?
4. If we're talking pure ambiance, Term-5 is totally uninspiring. It looks like a factory -- in a bad way, not in a hip Manchester way. And it has a disco ball. Which isn't a terrible thing in of itself, but when it comes with a banal, industrial atmosphere, it just feels sad.
5. The people; o the people! I don't mean to sound like an elitist, but the people Term-5 attracts are, often enough, not your standard concert-goers. These are people who don't go to shows. These are kids whose parents drive down the West Side Highway to pick them up. These are bros and drunk teens and loud, obnoxious groups of friends who don't understand basic concert etiquette. So, not the kind of crowd you want to swap sweat with.
Pros
1. The upstairs bathrooms are private, red-lit, well-maintained and well-manned.
Is that it? Bathrooms? I guess so! Well, bathrooms are important. Worst bathroom has to go to Public Assembly (so gross). And Monster Island and Death by Audio could use improvements. Oh wait, silly me. Coney Island takes the cake.
So, here's the dilemma. If I want to catch some fantastic bands, I have to suck it up and go to Terminal 5 because that's where they keep playing. Here's a running list of bands I have seen there so far (who can remember the order? these are not in order.)


1. The Black Keys -- not even close to the right venue to fit their sound or their persona.
2. Mindless Self Indulgence -- the lamest of their shows I have seen (even Jimmy Urine made fun of his audience.)
3. The Faint -- also the worst show of theirs I have seen.
4. Mogwai -- I could not see the band at all.
5. Avett Brothers -- okay, this show was good, but I still felt like the venue didn't suit them.
6. Justice -- this show was amazing, no complaints. Maybe Term-5 only works for electronica. Also, this was several years ago and my first Term-5 experience.
7. Miike Snow -- this was one of the worst in my show-going career, and it prompted this blog post. Miike Snow was great, don't get me wrong. But Major Lazer came on before them and played for at least an hour, and that was just horrifically painful. The only reason I endured that hour of standing close to the stage among dancing, drunk 17-year-old girls was to see Santigold, who was supposed to perform. She came on stage for seriously one minute, "sang" a song I didn't even recognize, and left. That was it. And as for Major Lazer: "Throw your hands in the air!" NO. "Throw your shirt over your head!" NO. "Scream!" Hm...
Well, the moral of the story is I hate this venue. But, I am going there tonight because it won't stop me from seeing The Kills for the first time [update! -- scratch that; can't go after all], and also Foals and Freelance Whales on May 4. Wish me luck!
Posted by amy dupcak at 11:21 AM