Last night I had the pleasure of watching one of the worst movies I have ever seen: Zardoz, from 1974, starring Sean Connery. Really the only time it's worth it to actually sit through something this awful is when you're with a bunch of people, and luckily that was the situation in which I found myself (even though it resulted in a completely miserable series of train rides home from Brooklyn at 2am). If you're wondering what makes Zardoz so uncompromisingly awful, I'll give you the jist of the storyline: Zed, a hairy guy with a handlebar mustache wearing booty shorts and sporting ammo, is an "exterminator" for his god Zardoz: a giant, floating, stone head that spews guns from his mouth for his mask-wearing league of exterminators. Zed sneaks into the head, shoots a guy with a Sharpie mustache and blue doo-rag, then magically finds himself in a world dominated by scantily clad, immortal women who have psychic powers but don't understand how an erection works. They talk to crystal rings and grow things in plastic bubbles and somehow Zed, whose DNA is apparently impressive, eventually goes inside a crystal and experiences some trippy montages. Oh and then he almost starts an orgy because women are so turned on by the taste of his sweat. Basically, the film makes little to no sense, and even guns, boobs, horses, and the occasional explosion can't save it from being boring, confusing, and absolutely ridiculous. So bad it's good...but not really. 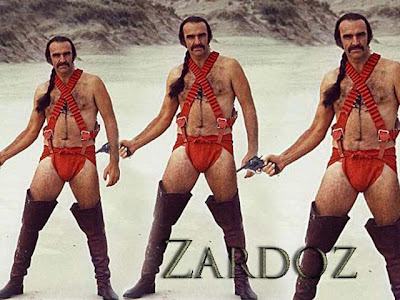