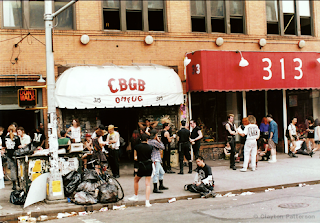 Recently, a former student asked me for some help. Now a second-year architecture student, she was "designing a library in the Bowery area for class and wanted to make the content of the library music." She was wondering if I "knew anything about how the punk rock culture affected the Bowery and the neighborhood" as well as "its effects today and the mark it left in society." Naturally, I was flattered that she considered me some kind of expert on this topic. Below I share my rambling message, with some minor rewordings!
For starters, I recommend watching Captured (a documentary about Clayton Patterson), which details the chaotic history of the LES and the Bowery through the literal lens of its most important historian. In fact, I recommend just looking at pictures Clayton has taken, as well as this fantastic interview. Other pictures you should look at include those by Marcia Resnick (who happens to be good friends with my good friend's dad) and Jenny Lens. Both really capture the essence and aesthetic of the era and some of its major players.

Luckily I got to see one show at CBGB's (though certainly the place was already past its prime). I don't know if you know this, but CBGB's had "famous" bathrooms because of their extensive graffiti and stickering. Pretty much any good punkish venue should have heavily stickered bathrooms. Just think of all the things people do in bathrooms...cocaine and sex galore! I don't know if that factors in design-wise, and I'm afraid I can't say I know anything about how punk culture affected architectural design, but interior-wise, keep it gritty and dark. Not a lot of windows. 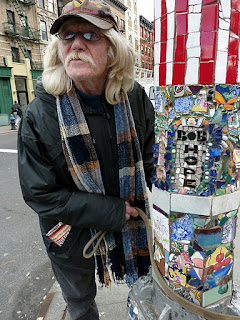 Have you seen all the mosaics around the East Village -- on streetlamps and such? Those were done by Jim Powers. They came after the whole punk thing, but I feel like they're a decent representation of the spirit of punk and were perhaps influenced by it. Jim took matters into his own hands and created public art that tied the community together, even though gluing tiles to lampposts was a rather dangerous endeavor when you consider how crime-ridden the area was. I think the culture of punk was very tight-nit in a similar fashion: lots of little pieces glued together, lots of colors, and most of it very "street" since there was not a lot of money going around. Punks all made use of what already existed, for the most part, like warehouses and basements and the sidewalk, and remember too that some of them were squatting in Tompkin's Square and abandoned buildings. Patti Smith and Robert Mapplethorpe actually lived in the Chelsea Hotel .

I think the punk rock culture attracted people -- musicians, filmmakers, artists, and people who just loved those things and wanted to live an unconventional lifestyle in contrast to societal expectation -- to the area, and eventually this led to independent businesses that catered to such things: little bookstores, record stores, video stores, etc. I worked at Kim's Video for a year, when it was a three-level store on St. Marks (now it's a one-level store on 1st Ave) and though that originally opened (on Ave A) in 1987, I feel like even that store was, in some way, influenced by the neighborhood's history....the idea of selling vinyl, carrying zines, selling burned DVDs illegally (ha!), and renting out old videos on VHS. The neighborhood is extremely different from what it once was and gentrification is partially (or mostly?) to blame, but inklings of that era remain.

I guess I bring up Kim's Video because it appealed to people who still wanted to listen to music on record and watch a movie on VHS (and there were lots of 'em), which were around during the punk movement. Things back then were physical and bulky (as opposed to digital and invisible) and not as easily obtained or as functional as they are today. People listened to music in groups; there were no ipods or even walkmans. So everything had this communal vibe, particularly when you consider gutter-punks who often squatted together and watched each other's backs. I think all the gutter-punks you see now (around Tompkins for example) are probably attracted to the area for its punkish history. Then you have other little reminders, like a bar that plays punk music, a bar that has an old photobooth, or tattoo artists who remember working when tattooing was illegal in NYC. 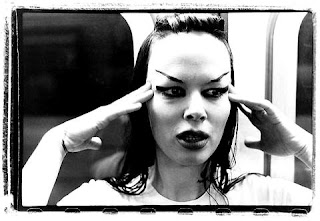 Nowadays, I think Brooklyn carries the spirit of that era more so than Manhattan, though there are still a plethora of shows around the Bowery and in the LES, which has places like Max Fish and Cake Shop and ABC No Rio. I think that era also inspired the arrival of many art galleries, in Soho for example, which catered to low-brow art, video-art, the avant-garde, graffiti, found objects, etc. Then of course you had Basquiat --- watch Downtown 81 if you can. He's in that movie and it really shows you what the area looked like in 1981...it looked like a warzone!!

You also had the "Cinema of Transgression," led by Nick Zedd. It might not really be worth looking into this for your project, but the LES really did have its own unique film history (also documented by Clayton Patterson). Nick Zedd's films speak to this explosion of eccentric creativity, and Kembra Pfahler was in some of his films, looking all crazy and non-human and feminist risque, and she also leads a band called The Voluptuous Horror of Karen Black -- they stir things up! I do think that a greater sense of feminism, "shock value," and daring artistic expression came out of the whole CBGB's movement, along with, perhaps, the idea of an extended period of youth in direct opposition to the status quo. 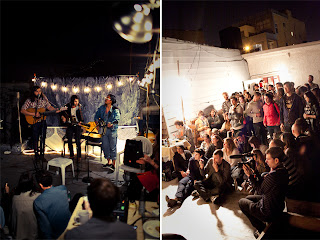 So as for the mark it left on society...well like I said, Brooklyn. I really believe that some of the hispter Williamsburg culture is an offshoot of the original punk movement, though there's a lot of imitation (of the Urban Outfitters variety) that lacks actual substance. But people start their own businesses (cafes, markets, boutiques, record stores, etc) and their own venues in weird places throughout Brooklyn (Glasslands, 285 Kent, Death By Audio, etc), and I've definitely compared shows I've been to with pictures I've seen from the '70s and it honestly doesn't look too different (though the rest of NYC does). There are rooftop shows and basement shows and lots of random DIY things going on...even the biking craze, anarchists, and Occupy Wall Street seem to owe something to NYC's punk past, at least to me.

The whole DIY culure came out of that ethos, which has fostered more art, more music, people starting their own record labels, people pressing their own zines and chapbooks, and even people growing food on their rooftop. On the Bowery today, we still have Billy's Antiques (it's literally on Houston and the Bowery) which has been going strong for decades...something like that (a guy selling old furniture on the street) also comes out of the punk-on-Bowery era, as does the Yippee Cafe, and even Bowery Poetry Club. It's all about making art, sharing art, and giving the middle finger to what mainstream media says is cool or accepted.