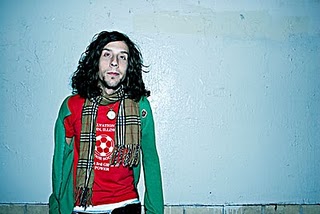 Due to the suggestive sharing of one Christopher Paul Stelling, an incredibly talented songwriter/ musician in his own right whom I will return to at a later date, I came across Paleo, aka David Strackany.

According to good 'ol Wiki, David is notable for writing a song every single day for one year using a "half-size children's guitar" while living out of his car and being essentially homeless. He did this while touring the United States and driving more than 50,000 miles from April 16, 2006 to April 15, 2007, playing more than 200 concerts along the way. He even received a nod from Dick Cheney for doing so! David plays acoustic and sings all folky-like and has procured a deal with indie music label Partisan Records for his new album...Paste Magazine is featuring Paleo and streaming that record, Fruit of the Spirit, and let me just tell you, I am completely in love! Of course, it doesn't have all 365 songs, but you can download those here. 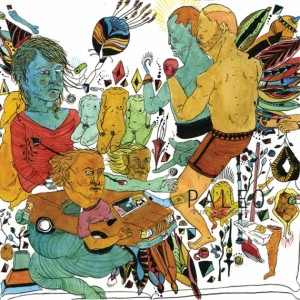 Wonderful music aside, I'm in love with the notions of a) recording a song every day for a year like keeping a diary in a more abstract and public manner, b) embarking on an artistically inspired expedition and abandoning all conventions of society while doing so, thus living off the grid and subjecting yourself to the whims of your own creativity, as well as the whims of those you encounter, c) having the guts to do b, and d) playing on a children's guitar! David, excuse me Paleo, alludes to this during "Over the Hill and Back Again" where he sings, "We wanna be young when we grow up."

The album does indeed boast a sense of unfettered, haphazard youthfulness, and that colorful cover adds a certain indie charm, but the songs also seethe wisdom --- perhaps a result of such a journey. "Favorite Places," for example, is slower than most and a drop melancholic, though "Holly Would," just following, is uplifting and jovial. Then in "Buddy, Buddy," David lets loose some seemingly painful howls, his already raggedy voice dragging across the width of his words. These songs are sweet and sour, loosely constructed and tightly melodic, and altogether filtered with sunshine and specks of real-world grit like bits of sand between your teeth.

For me, Paleo is a descendent of Daniel Johnston and Darcy Clay with a bit more musical accompaniment. He's got a Beatles sense of melody ("Honey Be Reckless"), a Velvet Underground sense of deconstructing that  melody ("Poet"), and a Bob Dylan aesthetic ("Lighthouse"). But don't take it from me, ya know? Give it a listen and let me know if you're as hooked as I am!