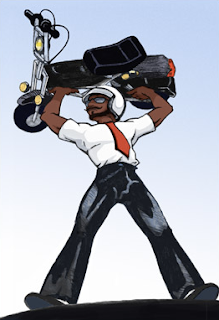 If you've ever been to Austin, you know it's one of those you-kinda-need-a-car cities. You also know about its night life --- bars, clubs, venues, Red River and 6th Street all lit up and spilling out music. There's a damn good reason it's home to SXSW, after all. It ain't just about barbecue over there (thankfully).
If you live in Austin, you have most likely heard of Square Patrol --- a designated driver, not-for-profit service. Say you're drunk, it's late, and there's no mass transit the likes of NYC. Do you try to catch a cab? How much might that cost? What if there aren't any? And what about your car?! What a pain to have to go get that come morning...

Well, what you'd do in such a (familiar) scenario is call Square Patrol, who will come to you, wherever the hell you wind up, and drive you home in your OWN car, for free! It's nice to pay them, but that's up to you.
It just so happens that one of my very good friends, Shawn Fernando (a musician too, check out The Stevedores), dreamed up this whole thing and started the service a few years back. Originally, the Square Patrol drivers had small motorbikes. Decked out in a cute, nerdy uniform --- since they're squares and all --- the driver would ride to your location, fold up that motorbike (believe it!) and take the reigns of your vehicle --- even if it was stick shift!
Now Square Patrol has a two-car system rather than motorbikes, but they're still dedicated to keeping drinkers off gas pedals, thus keeping the city of Austin a whole lot safer. However, being a non-profit, they are currently facing financial struggles and could really use your help, whether or not you dwell within the great city of Austin. So do me and everyone who's ever been affected by drunk driving a favor and chip in a little something. Do it, it'll make you feel good.
DONATE TO SQUARE PATROL
Posted by amy dupcak at 1:43 PM