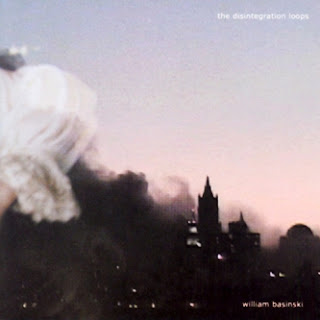 I have to admit that I am rather late to discovering William Basinski, but I have always loved ambient music and the story of his Disintegration Loops completely fascinates me.

First of all, let's look at what a loop is (please don't mind my assumption that you, the reader, like me, the writer, also need a little definition). A tape loop is "prerecorded magnetic tape used to create repetitive, rhythmic musical patterns or dense layers of sound."

So we've got patterns and rhythms and phasing and repetition that can either stand on its own, aid a solo artist while he/she's playing live, or add background sound to any number of compositions. Also consider that "a measure of recorded magnetic tape is cut and spliced end-to-end, creating a circle or loop which can be played continuously, usually on a reel-to-reel machine." Sort of like a Mobius Strip of music!
William Basinski is an American avant-garde composer of ambient music who, throughout the 1980s, created many  experimental works using tape loops, as well as found sounds and radio static. While Basinski played with bands, collaborated on projects, and produced records, his most widely known contribution to music is these Disintegration Loops. And herein lies their incredible story, more of which you can read here.
Back in the early '80s, Basinski made some tape loops. Fast-forward to August of 2001 when he was living in Brooklyn and seeking to transfer these loops from analog reel-to-reel tape to hard disk. As he began transferring, he realized that the old tapes were disintegrating as they played, all of which he continued to record. In the liner notes of the four-disk Disintegration Loops, he notes that "the music was dying." He recorded his old loops into September of 2001...on September 11th, he was completing his process as the Twin Towers fell.
Michael Heumann writes: "He and his friends went on the roof of his building and played the Loops over and over, all day long, watching the slow death of one New York and the slow rise of another, all the while listening to the death of one music and the creation of another....The music, however, is beautiful, subtle, sad, frightening, confusing, and ultimately uplifting. What's he created here is a living document: a field recording of orchestrated decay. It sounds like nothing else I've heard, yet, at its core, it's the simplest and most familiar music I can imagine."
On her blog, writer Amy Rose shared one track from the Loops as part of her three-song playlist. There are many more tracks available, but I think this is particularly peaceful and hypnotic.