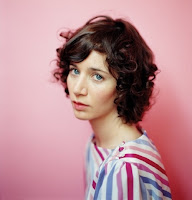 Miranda July: writer, actor, performance artist, director...and oh how I love her brain.
Well, to be more specific, I love the quirky sense of humor that emerges in stories and films; her willingness to expose personal fears and flaws, thus bringing authenticity to a storyline; and her boundless creativity, which never seems to hinder her ideas and always pushes the audience/reader to consider new possibilities in fiction and film. Have I gushed enough?
This summer, I happily attended one of the premier showings of Miranda's latest film, The Future, at the IFC Center. Much like the stories in her collection, No One Belongs Here More Than You --- which reveal small moments of tension, sadness, and awkwardness in the lives of rather odd individuals --- The Future's main focus was the relationship between Sophie and Jason; in their mid-thirties, the two have been dating for four years. Not unlike Miranda's first film, Me, You and Everyone We Know, Miranda plays the female lead. But while Me, You and Everyone We Know jumped around to unexpected scenarios involving different, yet interrelated, characters, The Future maintains its focus and appears more linear...but that isn't to say it's in any way "the norm!"

See, Sophie and Jason feel obligated to adopt a cat with a damaged paw... his name is Paw-Paw (and Miranda does his cute little voice). The only problem?: they're afraid that becoming responsible for this ill (and existential) cat will change their lives for the worse, and they're convinced they need to achieve some goals before Paw-Paw invades their home. For Sophie --- who quits her job as a dance teacher for toddlers --- that means creating 30 dances in 30 days and posting them on the internet. For Jason --- who quits his job as an at-home computer repair guy --- that means walking door-to-door selling trees...a job that doesn't pan out quite the way he imagined when he chanced upon it. He does, however, meet an old man named Joe (from whom he initially buys an old blowdryer, as advertised in the PennySaver) who offers him sage advice about how he is just in the "beginning" stages of his relationship with Sophie, and how the two of them will likely do terrible things to each other.
Jason decides that he and Sophie are, like most people, too dependent on the internet, so he has it turned off for a month --- a truly funny scene that involves the two of them making last-minute, desperate attempts to look things up before the internet's shut off, and prompts a conversation in which they try to figure out how they will now get information. Despite all attempts to better their lives and perhaps their romance, neither Sophie nor Jason is what one would call "happy"...though the nuances of their relationship are adorably personal and suggest that they are meant for each other. But those collective fears of the future, of change, and, in some ways, of themselves are truly holding them back. 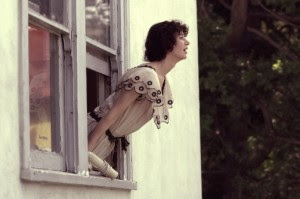 Sophie is often paralyzed by her own inexplicable fears, as evidenced by her (hilarious!) attempts to  record new dances. She turns to an old tee-shirt, named "Shirty," for comfort. During one panic attack, she decides to call the number of the artist on the back of a drawing, which Jason has purchased at Paw-Paw's animal hospital. The phone call leads to Sophie shouting out the window to see if Marshall, the artist, can hear her. It also leads to a pretty severe  "oops" between Marshall and Sophie. And here's where things get even weirder.
On the night Sophie feels she must confess to Jason, he touches her head and literally stops time --- this occurred earlier in the film as a game the two of them sometimes play, but now time has stopped for real. Not only that, but the moon is talking to Jason through the window, and the moon's voice is old man Joe. This break in time --- and break in the film's realistic, albeit odd, narrative --- leads to an alternate universe wherein Sophie is with Marshall, and Jason, too afraid of what Sophie is about to tell him, realizes that he has stopped time permanently and must try to fix the world. In Sophie's alternate life, she lives with Marshall and his daughter; while some things seem idyllic, her former life keeps creeping up on her...most noticeably when Shirty tracks her down. There is no simply no escaping the girl she once was. And all the while, Paw-Paw tries to be patient, as he waits for them to take him home.
I love when a film or story can break form and still find its way back to "normal" so that its believably is not completely lost. Sometimes, when a film goes off the deep end, there is  no turning back...it just spirals into "huh?" territory. Other times, things become too logical and explanatory. In The Future, however, Miranda seems to already anticipate her artsy and open-minded audience, thus allowing her to present impossibilities and still bring us firmly back to the  land of the (mostly) possible...no big explanation needed. 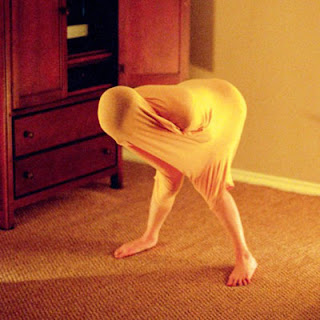 In the Q&A session, Miranda revealed her creative process and the evolution of this piece, from script to performance to film. She spoke about creating a sort of visual language as well as symmetry --- in casting Hamish Linklater to play opposite her as Jason, Miranda assumed the audience would feel that Sophie and Jason belonged together aesthetically; on the other hand, she and David Warhofsky (who plays Marshall) look absolutely wrong.

Miranda also revealed that Shirty was based on her very own precious tee-shirt that travels with her from city to city and hotel to hotel; and just like Sophie, Miranda often feels trapped by her own anxieties. By exposing some of the things about which she personally feels ashamed, Miranda has allowed viewers the chance to analyze and maybe even accept their own idiosyncrasies. She also told us that that Joe was an old man she met when she went door-to-door to meet people who had advertised in the PennySaver! He ad-libbed a good percent of the role!
One of the most poignant moments (which also pushes the movie further toward "art film") is the dance Sophie performs inside her tee-shirt, while living in Marshall's house. Miranda discussed how this dance emerged in her performance, and how she felt it was a pivotal moment for Sophie --- she is literally wrapped in her past self as she hurdles, like we all do, toward some kind of  future.
--amy dupcak.
Posted by amy dupcak at 10:37 AM