In honor of Valentine's Day, I present to you my Top Ten Favorite Couples. Just look at these lovebirds!
<3 *<3*<3
1. Say what you want about Yoko Ono, but come on now. If John-and-Yoko aren't the modern ideal of love, peace, and harmony, I don't know who is. Minus that infamous "long weekend." 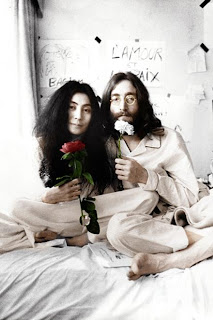 2. They are classy, iconic, and quite evenly matched... Iman sounds like a robot, and David Bowie must have played one at some point in his career, right? Or maybe they're just both aliens. Hot aliens. 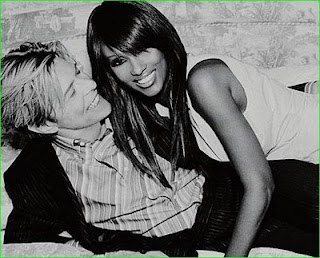 3. The best thing about coupledom is when one becomes a muse to the other. Sherri Moon has been Rob Zombie's sexy-scary muse in so many ways over the past decade of his eclectic career; she's been on album covers, in music videos, and of course played pivotal roles in all of his films. They are the modern-generation's horror movie king and queen. And, quite appropriately, Mr. and Ms. Zombie wed on Halloween. 4. Win Butler and Regine Chassagne pump the heart of Arcade Fire, making music together as a married duo within a larger collective that also comprises Win's bro. Here's another example of a couple working together creatively. In this case, they are side-by-side equals, providing vocals, lyrics, instrumentation and even Haiti activism. "Then I'll dig a tunnel through my window to yours." Yeah! 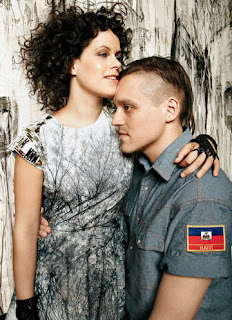 5. They're sort of obvious, right? Except that these two are the total opposite of cutesy V-day love. The punk-rock Romeo and Juliet...Sid might have stabbed Nancy, and then he overdosed on heroin. Death-pact for sure, but something about it is horrifically romantic. 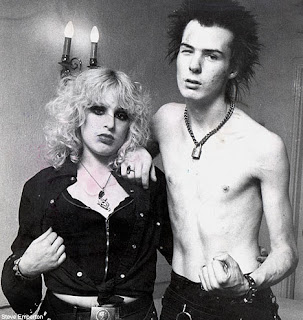 6. Though Robert Mapplethorpe tragically died of AIDS long after he and Patti Smith split, her recollection of their mystical union in the memoir, Just Kids, gives readers a glimpse into the urban fairy tale of their relationship. Living in NYC from the late 1960s onward, these two artists deeply shaped each other's lives, careers, and everlasting souls. 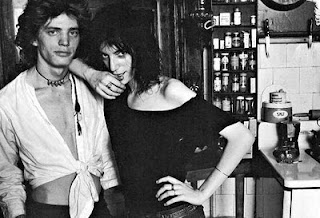 7.  The love affair between Nico and Jim Morrison may have been brief, but there's almost no relationship more poetic. In 1985, Nico had this to say about her former lover: "I like my relations to be physical and of the psyche. We hit each other because we were drunk and we enjoyed the sensation. We made love in a gentle way, do you know? I thought of Jim Morrison as my brother, so we would grow together. We still do, because he is my soul brother. We exchanged blood. I carry his blood inside me. When he died, and I told people that he wasn't dead, this was my meaning. We had spiritual journeys together." Beautiful.

8. On a less serious level, we've got the funky, Israeli-born Hank + Cupcakes. Lanky Hank's on guitar, cute Cupcakes is on drums and vocals, and together they're moving up in the indie rock world. 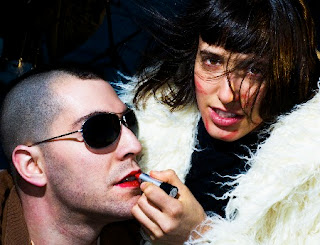 8. I don't care for Lindsay Lohan's drama or even her career (though yes I loved Mean Girls), but how great was it when she was dating Samantha Ronson? There was no coming-out fiasco...she just suddenly started dating a chick. Most of her controversy derived from drugs, drinking, and acting foolish, not from smooching an androgynous girl, which is just awesome! Can they get back together? Is Lindsay still a lesbian? Only time will tell. 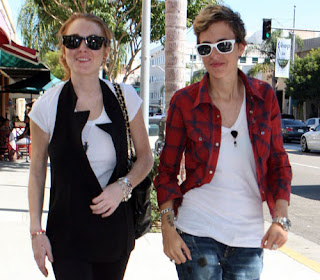 10. Well, I am going to do it. I am going to nominate a quirky writer-girl named Amy and her rock-climbing, sudoku-playing, vegetable-growing boy named Jeremy. They are pretty swell...pretty swell indeed. 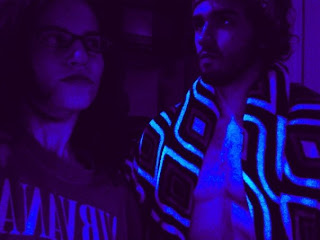