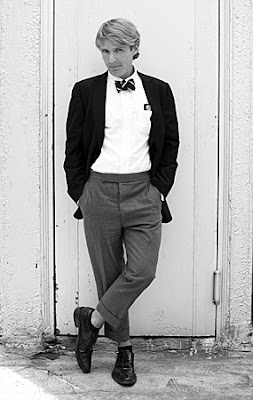 Scott Alexander Hess knows a thing or two about sex...and thank god for that! His literary novel, Diary of a Sex Addict (published by JMS Books), is a dark and incredibly racy portrait of a gay man for whom sex acts as a drug, comfort, punishment, and sometimes even a sport.
Scott is no stranger to pushing the envelope. One of the plays he's written and starred in, BJ, explored transgenderism in America and won an NYC Fringe Festival Jury Award for Excellence. He's performed one-man shows in a myriad of settings, penned screenplays, and is now hard at work on his third novel. Almost all of Scott's  creative works contain a lustful mixture of grit and glamor --- harsh realities and gruesome details coupled with exotic parties, sparkling clothes, or simply beautiful, dreamlike images.
I first met Scott at the very start of The New School's MFA program, where we both studied Fiction. It is with great pleasure that I continue to devour the pages of his many evocative projects.

No-Alternative: Let's start by discussing your novel, Diary of a Sex Addict.  What is this book about, and what makes it a unique take on sex addiction? 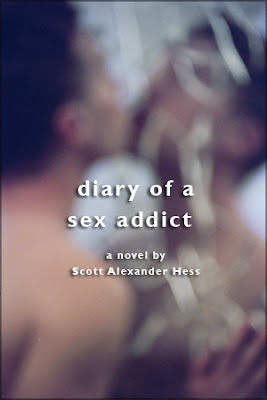 Scott Alexander Hess: The book is a snapshot into one wild, sex-drenched, dark month in the life of a New Yorker. The blurb I wrote for the book jacket sums it up pretty well, so I’ll share that...
Witty, dark and explosively carnal, Diary of a Sex Addict chronicles a gay New Yorker’s month long descent into a circus of anonymous hook-ups as he struggles to erase the pain of a failed romance, and the routine of a soul-numbing day job. Written in prose that is at once poetic and unabashedly lewd, Diary offers a glimpse into a forbidden fringe world of longing and debauchery that ultimately reveals the narrator’s fervent search for something to fill a profound emptiness.
Diary is told from the perspective of the unnamed protagonist --- the sex addict of the title. Why did you choose first-person narration for this story? Also, do you think that, despite our addict's poor decisions and risky behaviors, he remains likeable and sympathetic to readers?
I chose first person because of its immediacy. I want the reader to feel, smell touch and experience the depravity and intensity of the story as much as possible. Along those lines, while the narrator does reprehensible, even violent things, I feel the subtle, underlying anguish that guides his decisions help make him at least relatable, if not likeable.
You mentioned that the book takes place over a mere few weeks in the life of the addict. What made you decide on this specified time frame?
I wanted one icy, sex-drenched burst in this man's life, so I chose one frigid month in December. I think sustaining this type of destructive behavior for too long could utterly exhaust the reader. I hope to take the reader on a wild ride, and to whirl him/her to a peak of perversity, before it all crashes and they ideally lay spent, post prose orgasm.
Is there ever a time when you feel you've gone too far in your work? Do you ever feel the need to hold back and restrain yourself? And do you ever worry about readers' reactions to such raw, erotic, and sometimes brutal scenes?
No, I don’t. I am blessed that my post-graduate school writer’s group (the ponies) keeps me on the beam in terms of what is working in the narrative, and how it drives the story. There are times I have made changes because an action by the narrator is so reprehensible that he could lose all sympathy with the reader. Some narrators (like Patrick Bateman in the brilliant Brett Easton Ellis’ American Psycho) are so incredibly drawn they can get away with this, but not often. This type of holding back though is based on allowing the reader in, not on whether such action is too extreme or erotic.
Have you ever surprised yourself through writing and editing Diary of a Sex Addict? Have you experienced a moment of personal discovery or reflection while creating this harrowing tale?
I think with everything I write I do discover more about myself. I tend to float into a netherworld when I write. I lose myself in the work, as the character. I rely a great deal on stream of conscious writing, my mentors being William Faulkner and Cormac McCarthy, among others.
How is Diary of a Sex Addict different from your previous novel Bergdorf Boys, which was serialized in Ganymede Journal? And how does the novel you're currently writing, Jockey, differ from them both?
Bergdorf Boys is a lighter romp, though with a few dark edges. It was my first novel, so the feat of creating the novel itself was an accomplishment. Jockey is very different --- a mainstream and poetic novel.
All of my work deals with people who are a bit on the fringe (sex addicts, or a jockey who by trade must be small and weigh under 120 pounds all of his working life). And there is always a sense of the sensual in my work --- in Jockey, it is the boy’s gut level relationship with a horse. So that ties the work together on some level. But I can vary greatly in the use of language and topic. The rhythm of the book, the tone and language are determined by the narrator’s voice and the flavor of the book (erratic sex addict in Manhattan vs. a 12-year-old boy in rural Arkansas in 1918).
With novels, screenplays, plays and stories under your belt, plus Jockey halfway done, you're quite prolific! What is your writing process usually like? How do you get into the right mindset?
I don’t wait for a mindset, because if I did I’d talk myself out of writing. I set time to write, I sit down, I write. Discipline is key and I trust that what needs to flow will flow. 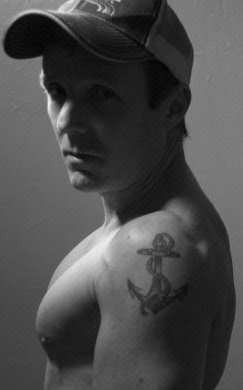 You are also a gifted performer. Has singing, acting, and performing in drag enhanced or inspired your writing life?
I think my experience as an actor has helped when it comes to really getting into the head of a character in a novel. . .and living his life.
How do you think being gay in New York has influenced and informed your creative projects?
Well, I was gay in Missouri when I popped out, so….I don’t really think much about my sexual preference in relation to my creativity.
What was some of the most helpful advice --- writing or otherwise --- you have ever received? And do have any advice for aspiring writers and artists?
Sit down and write. I spent a lot of time thinking about how I could write. At one point someone said to me “sit down and do it,” which was incredibly simple and incredibly helpful. I also really was inspired and kicked in the ass by two life changing and amazing books: The War of Art by Steven Pressfield and Julia Cameron’s The Artist's Way.
Which books, films, and places have inspired your work the most?
Travel is incredibly inspiring and cracks open my brain. I loved Egypt and Rome. Films are a constant inspiration. I’m currently re-watching two amazing films: Brian DePalma’s Dressed to Kill and Bertolucci’s The Sheltering Sky. To write, I read. Constantly. My mentors are McCarthy, Faulkner, Alan Hollinghurst, Jean Genet, and many more.
How do you plan to celebrate the release of Diary of a Sex Addict, and what are you most looking forward to with the book launch?
I want everyone who reads this interview to come to the book launch party at NYC Therapy Lounge. It’s going to be truly outlandish. All details are at www.scottalexanderhess.com and you can also read an excerpt of my novel and reserve a copy of the book. The ebook is out in September, the print in October.