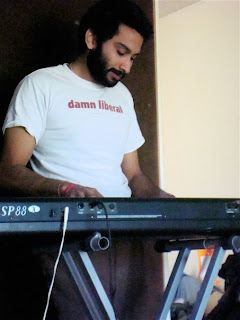 Within a few minutes of talking with Shawn Fernando, it becomes clear that he studied both music and economics at Sarah Lawrence College. Shawn loves to tackle new projects, be they musical, political, entrepreneurial, or otherwise. Case in point: he helped campaign for Obama, began constructing a solar energy tower in his backyard, helped displaced Sri Lankans build new homes after the Indian Ocean Tsunami, and started his own business in 2008, which is now a non-profit organization. That business, Square Patrol, is a donation-based designated driver service dedicated to getting your drunk self home in your own car and thus preventing harm to the Austin community.
But more visible than his business savvy and political know-how is Shawn's musical talent. He has played keys for The Stevedores (previously fronted by Spencer Bell) since 2004, and has formed his own band, Union Shop. Shawn is the songwriter, singer, and keyboardist of Union Shop, while Maria Mabra plays drums. The band recently released an EP, The Healing Machine, along with a music video that Shawn directed and edited. And while Shawn may not exactly be "press-ready" or Facebook suave, perhaps that's what makes him even more genuine an artist. I've known Shawn personally for years and could predict some of his answers, but I still grilled him about music, business, and living with a dog named Koya and a dude named Wolf in "the motherfuckin' ATX."


No-Alternative: How did you start playing music, and were you always specifically attracted to piano? Do you think you exhibit any traits that other pianists/keyboardists (or musicians in general) tend to share?
Shawn Fernando: My older sisters played, so even when I was a baby there was a keyboard that I would bang on. I started taking lessons very young, so the piano has really always been a part of my life in some way.
The piano is an architectural kind of instrument. The layout allows you to observe musical structure plainly. That sense is something I think keyboardists tend to share. It's also an academic instrument, so I think great keyboard players display a real academic insight into the structure of music. I try to have a little bit of that insight myself...that’s what I aspire to.
You sang lead in an earlier band, then sang back-up for The Stevedores, and now you sing for Union Shop. What is your personal relationship with singing, and is it ever a struggle?
Singing is a struggle, I think it must be for everybody. If it’s not then you’re not trying hard enough. Singing came for me after the piano and it’s a different type of control because it' a very physical act and you sing with so much of your body...the sound alters when you get into it, which is different from piano. It’s a different use of emotion and a very naked form of expression, which is hard psychologically. Ultimately though, probably because singing is hard, it is extremely rewarding.
Honestly it’s still a little bit weird. It’s much more taxing for some reason, both physically and mentally. And the writing process is certainly more revealing. But that’s my role.
Let's backtrack a minute. The Stevedores basically stopped writing new music less than a year after lead singer Spencer Bell's death, in 2006. Then the four remaining band members, yourself included, moved from Madison, Wisconsin to completely different locations. What was this transition like for you?
It was rough at first. That band was like a little family. Being without it so suddenly was difficult for all of us, I think. There was a lot more that we needed to write. Of course it was a tragedy, and I wish things had been different. But I can't complain about moving to Austin or where the journey has taken me.
What does it feel like to perform old songs with The Stevedores during Spencer Bell Legacy shows, which serve to honor, share, and remember Spencer's songwriting with a larger audience, all while raising money for adrenal gland cancer research?
That's a hard one to explain. A strange mixture of nostalgia, pride, sadness, and suspension of reality. When I come back to Austin after those shows it always feels like stepping out of an alternate reality.
Your current band, Union Shop, just released a debut EP. Are there any lyrical themes or concepts that tie together the seven tracks you wrote?
It is not a concept album or anything like that, but there are some themes that reoccur. There's a lot in there about loss and searching for something new. I've been playing most of those songs for a while now. When I wrote them, I was still trying to make sense of a new life here in Texas. I was still trying to wrap my head around the circumstances that brought me there and the nostalgia for the past. I guess the central theme is learning to let go of what is gone, and learning to embrace what is here.
I know you worked with several people to create this EP --- from rapper/recording engineer Matt Weiss to bongo player Uncle Larry. What was it like collaborating from the "helm of the ship" as opposed to within the standard band dynamic?
Fortunately, when you work with the right people, you don't have to micromanage. Most of the time, it was a really natural creative process. The only real difference between being "at the helm" and being a collaborator is in the initial writing process. I had the basic structures of the songs all figured out at the get go. But just like a true collaboration, there was still a lot of room for surprise.
Your first music video, for "The Mix," features a very happy man running himself silly! Can you talk about the backstory of "Running Man?"
Running Man is a very interesting figure. He is a real person; that isn't a character he's putting on. The dancing, the running, the shout outs to people in cars: that's his normal day. Almost every day, he wakes up in the morning, eats over 4000 calories, and runs for 12 plus hours. He's a deeply religious man in the very best way. He runs because he believes God wants him to make people happy with sweat and smiles. It's a life that only makes sense on an emotional level, and in many ways I think he's gotten it right.
Amid the many creative projects --- musical and otherwise --- you have undertaken in the past several years, what do you consider to be your greatest achievement?
I haven't given up hope. I do damn near everything I do because I love it. I wouldn't have it any other way.

Moving away from music, you started your own business in Austin. Can you talk about the initial inspiration and how the company first came together?
Square Patrol came about when my friend Vladic visited Austin for the first time. We had a few too many, and when we walked out of the bar, we realized our car was going to be towed if we left it in in the parking lot. Vladic remembered a news story that we had seen years earlier about a service in London that delivered designated drivers. He said we needed one of those...because we did. We ended up walking home that night (thankfully it wasn't far), but the idea hooked me. People all over town make that decision every night. If we can get to some of them before the keys hit the ignition, we all end up safer.
Is there any personal motto you live by, or want to live by? And do you have any advice for aspiring musicians?
Always try to understand. Understand the world; understand yourself; understand the people you love. That's where music comes from.
Last but not least: your song "ATX" is very pro-Austin! So, what is it about Austin that you love?
A lot! The weather, the bbq, the culture. It's a true melting pot here. People from all backgrounds can coexist, make eye contact, and drink beer together. It's a town full of travelers, and you can tell.
The Mix, By Union Shop from Shawn Fernando on Vimeo.
(photo of Shawn by a.dupcak, photo of The Stevedores by Claudia Ochoa)
Posted by amy dupcak at 11:36 AM