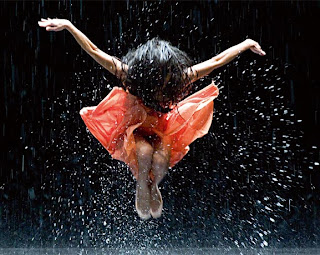 Spring is fast becoming my favorite season (beating out summer and early fall!). March means spring, and spring means dancing, and dancing means my sole recommendation for the month.... Pina!
Wim Wenders directs this part-dance film, part-documentary in 3D, which is about the passion, choreography, and ultimately the loss of a German dance choreographer named Pina Bausch. Pina's unconventional style of modern dance ofter verges on performance art, telling a story through movement and music. Unlike some other forms of dance, the dancers in Pina's company --- called Tanztheater Wuppertal --- are almost like actors in how they interact, and their facial expressions are just as important as their bodies. 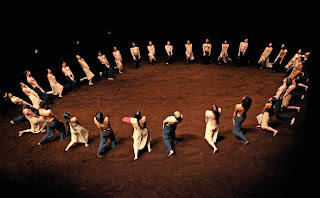 Pina was really a trailblazer, letting her classical training lead her into largely unknown territory; she was very interested in portraying emotion as well as male-female relationships through dance (though not without some humor), and she sometimes stuck her dancers in seemingly infinite loops of motion. The dancers fall into, carry, kiss, and fight each other in a way that almost resembles miming, but without being so literal. She also invited the natural elements to literally spill onto the stage and become part of the performance. Many of her productions involve props, such as a giant rock on stage, or a cafe setting with many tables and chairs.
The film Pina was conceived with Pina's participation; she started to collaborate with director Wenders in 2009, but during the preparation stages, Pina died unexpectedly of cancer. Pina's dancers convinced Wenders, who had cancelled production, to carry on with the film, which began to take a different shape. The film is dedicated to Pina, as her former dancers and friends speak of the time they spent with her, how she made them better dancers, and how she impacted their lives. 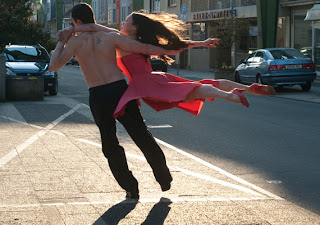 A few key elements are at work in Pina to make it a truly special film, and unlike any other I have seen or even heard about. One is the fact that it has no apparent narrative, or at least not a linear one. We move in and out of different dance pieces, most notably Le sacre du printemps (The Rite of Spring), which starts us off, Cafe Muller, Kontakthof (Courtyard of Contact), and Vollmond (Full Moon).

Some of the dancing is on stage, as an audience would see it, and some is done in public and outdoor locations -- large halls, dusty hills, a crossroads, a swimming pool, the ocean, and even an elevated railway. For The Rite of Spring, the stage is covered with soil, while for Vollmond, the dancers on stage splash around in water. Some of the pieces involve many dancers, and others only one or two. Intercut with the vast array of dancing are intimate conversations with the dancers, who face the camera and highlight their experiences with Pina --- how she taught them to be unafraid, to look deep within, and to express their most secretive selves. We also see some old footage of Pina teaching the dancers, and even dancing herself.
Another key factor is that it was shot and presented in 3D. This was actually the very first 3D movie I have seen in the theater, and though it threw my head for a loop, it was perfectly suited to the film --- it is as if we, the audience in the movie theater, are actually attending a dance performance and watching the dancers move up and down the stage. Even the subtitles pop out, as each scene plays with dimensionality to create the feeling that you are inside of it --- dancing, participating, watching everything come alive. 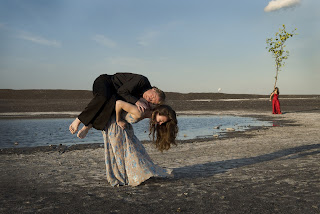 Between the bright colors of costumes and sets, absolutely surreal images, and a camera that dares to zoom in on the dancers' every wrinkle, Pina can't not affect viewers' imaginations and emotions.

I also love that so many strong, older dancers --- those who would not usually appear in dance films or dance performances --- were part of this film; in fact, it seemed that there were far more older dancers than young. One of the dancers even remarked that working with Pina was lucky if you were older. Courtyard of Contact was performed multiple times in the film, with groups of different generations: teenagers, middle-aged dancers, and dancers over 65. Seeing each dancer "age" and then regress, while showing off their faces and figures to an imaginary audience, was truly fascinating.

No, there was no hurricane that swept across the stage,
there were just … people performing
who moved differently then I knew
and who moved me as I had never been moved before.
After only a few moments I had a lump in my throat,
and after a few minutes of unbelieving amazement
I simply let go of my feelings
and cried unrestrainedly.
This had never happened to me before…
maybe in life, sometimes in the cinema,
but not when watching a rehearsed production,
let alone choreography.
This was not theatre, nor pantomime,
nor ballet and not at all opera.
Pina is, as you know,
the creator of a new art.
Dance theatre.