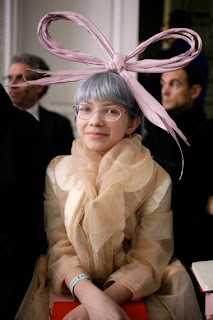 Yes I am now 28 years old, but my new "idol" is only 15. Her name is Tavi Gevinson and you might know her as that kooky little girl who dyed her hair gray, dressed like a granny with big huge bows and oversized clothes, and started her own fashion blog at age 11, apparently without her parents' knowledge. In the past few years, she's become something of a fashion icon, partying with celebs and attending runway shows galore. She also started her own magazine called Rookie, which is a website for --- and essentially by --- teenage girls, about fashion, culture, art, and life.
When I first heard about Tavi, I was skeptical. I mean, an 11-year-old's fashion sense? An 11-year-old's writing? I also don't typically care about fashion --- it just so happens that my '90s look is in again, and I'm not even happy about it. But after researching Tavi on my own, I have to say this girl is definitely an inspiration. She doesn't just mimic things she sees for attention or to look cool; she's genuinely interested and seems to possess an innate artistic sensibility, as well as a precocious awareness. She's also just having fun experimenting...and she's allowed to. 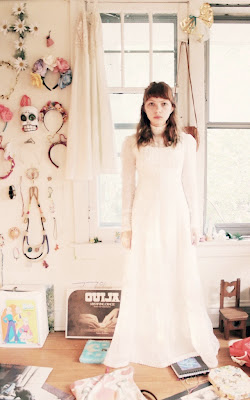 Most 15-year-old girls today are obsessed with fitting in at school, fitting whatever societal mold, fiddling on their phones, getting boys to like them, the works. Most of them don't sit down and compose well-planned blog posts...and if they do, they certainly don't read like Tavi's do. This girl defies most of the stereotypes her generation has received (well, aside from an addiction to the internet, but I'd like to think Tavi's using it wisely)...she's hard working, ambitious, independent, and has discovered many things that came out before she was born. Things I myself love, both then and now. Things like Hole, riot grrrl, Sylvia Plath, Twin Peaks, Virgin Suicides, Ghost World, Rocky Horror, My So-Called Life etc (she has good taste). Her blog is filled with handwritten journal entries, art, musings, collections, and plenty of photographs: she takes pictures of herself wearing outfits she put together, and she displays vintage finds and little art projects she creates in her bedroom. She's a girl who's constantly inspired, and that inspires me. I hope it inspires girls her age, too.
Maybe I'm giving Tavi too much credit...certainly it's also true that Tavi reminds me of myself. I wrote my own magazine in tenth grade, called Punky. Unlike her, I printed mine on paper and distributed it at school for 50 cents. Unlike her too, it did not focus on fashion, but I researched and wrote about music, films, and plenty of other things that interested me, like she does. I also loved to decorate my room -- one of my favorite forms of self-expression -- as well as my self, though we had different ways of going about it. Tavi also reminds me of two particular girls (looks-wise and mind-wise) that I thought were cool when I was around her age (well, I still think they're cool). The first of these girls had pink hair at age thirteen, and she was as artistically inclined and intelligent as Tavi. The second of these girls had a funny haircut; she was also an artist and a writer in the making. I guess sometimes we never grow out of our former mindsets... 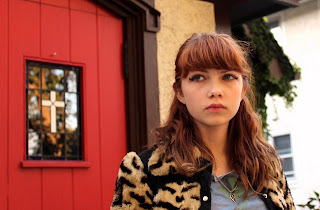 In case you need convincing about how intelligent Tavi is, I want to share something she wrote on her blog to accompany a recent photo of herself; a photo she hesitated to post because she knew she looked good in it, as opposed to looking like a "grandmother on ecstasy at Fashion Week." I'll skip some bits for the sake of brevity (as indicated by an ellipses), but here are her own words:

First, let's talk about beauty privilege real quick, just so we're all clear and so I don't sound like a jerk:
When I say good or pretty or attractive, I mean by the standards that dictate our society, which usually start with being thin and white. I'm not saying I always like how I look, and you may look at the picture above and be like "what are you talking about you resemble an opossum," but through the very narrow lens of mainstream media, pop culture, etc., I possess some beauty privilege.
...

The general voice of my blog has been very much against the idea of those (or, in a way, any) standards for a long time, maybe not in so many words, but definitely in spirit. I once relished in an email I got saying I was an ugly boy because it felt like proof that I hadn't given in to societal pressure to be pretty that girls usually feel affected by. I got all self reflecty on Tumblr about creating my own ideas of beauty. I wrote simply during September's No Makeup Week that I never felt the urge to wear any. I used to dress much more frumpily and goofily, on here and in public real life. Which was great, and I loved it. But, as is the point of this blog, my style has changed a bit.
I would be lying to say it ends at simply wanting to try a different aesthetic of dressing, though. With one's freshman year of high school comes a new batch of insecurities and a new kind of self-awareness. Except...I would be lying to say it ends there, too, because I know I'm smarter than that, and I know I have a good bullshit filter when it comes to conformity pressure in high school and women's magazines and men's magazines and industries that thrive on their female demographics' insecurities. 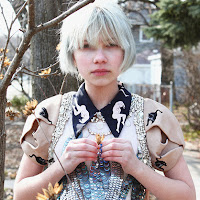 Before I got contacts in March, I just never really counted myself in the general pool of people who might be considered attractive. I wasn't insecure about how I looked, I just made peace with the fact that I wasn't, to me, an attractive person, and decided to milk my charming personality instead. The glasses were an easy way to isolate myself from even having to consider keeping up some kind of face. Then I slowly came to feel that, well, maybe I did want my face to be visible. Maybe I liked my face. Is that not okay?

Right now, I could pretend to be an archetype of a feminist superhero and say I never want to be a conventionally attractive person. But, while I have so much respect for the people who can say that truthfully, I'm not there yet. I think it would be, in my case, much more effective to be honest and willing to have this conversation instead of signing myself to a stereotype I can't fit. I admit to the basic human desire to be attractive. That's certainly not all I want to be, and I'm not bending over backwards every morning for it, but it's there.

I don't know if I'm trying to justify this to readers of this blog or to myself. I do know I'm uncomfortable pretending, on a blog that is, on a certain level, about appearance, and my personal ~journey~ with it, that I can keep up with a set of principles developed when I was younger and different and 12 years old. But I mentioned earlier my bullshit filter, and I think it's that awareness that makes it easy for me to know that my new almost-daily makeup routine and glassesslessness and etc. are for myself and no one else.  --- Tavi Gevinson.

"Wrinkles and scars and imperfections are signs of life, not of being young and naive and sexy and nonthreatening, so if an aging woman doesn't take measures to erase indications that she's built character through experience, if she can no longer be viewed as a sex object or as recently discovered and relevant, she may as well just disappear. It's subversive to age as these women do, making themselves present, because they want to be. I know now that I'd rather keep all my life scars and be erased for doing so than have to erase them myself." -- Tavi Gevinson.
Posted by amy dupcak at 3:55 PM