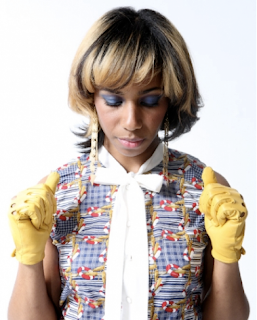 I was first introduced to Santigold back when she was Santogold, and sort of by accident. I was at SxSW in 2008 and waiting to catch MGMT, when Ms. Santi White took the stage first. As I wrote in my rather long-winded recap four years ago:

Friday night began for me on the dirt behind Stubb's again, where I caught the infectious Brooklynite called Santogold.... By fusing reggae, hip-hop, club, R&B, and Caribbean and African drumming, Santogold creates a delicious brand of shiny, funky pop that is very much her own. She performed in front of a DJ and in the middle of two backup singers/dancing, who donned colorful baggy pants and plastic sunglasses, while Santogold herself bounced around in a loose tanktop, pants, and sneakers; I found these three strong, black females very inspiring.

I even wrote a cover story on Santigold for BRM, when it was still a print magazine. But then, Santigold failed me! See,  I was super excited to see her perform at Terminal 5, when she was on the bill with Miike Snow, as well as Major Lazer. As I wrote here on my blog: "The only reason I endured that hour of standing close to the stage among dancing, drunk 17-year-old girls was to see Santigold, who was supposed to perform. She came on stage for seriously one minute, 'sang' a song I didn't even recognize, and left. That was it." What a let-down...and who does that when they're on the bill, and not just a special guest? I thought Santi and I were through.

But now, with her upcoming album set for release on May 1st, I'm giving the L.E.S. Artiste whose debut album I so adore another chance...especially because she's just too cute in the video about shooting her album cover for Master of My Make-Believe. This cover perfectly encapsulates the strong, confident Santigold I stood in awe of back in 2008. She poses as three (well, four really, but two are "identical") characters on this feminist yet terrifically playful cover, and it's just thrilling to see an independent black woman continue to defy both societal and musical expectations.

What I loved about Santigold from the very beginning was not just her almost masculine edge and catchy-yet-quirky music, but also her desire to break the mold of what the media and music industry seem to expect from its female "pop" performers. Nothing about Santigold is what one might call "typical," but it's also not so atypical as to be contrived or a gimmick. And above all else, her creativity and point-of-view always seem to shine through. So, maybe it's just me, and maybe it 's like a "duh Grace Jones!" moment, but I find this new album cover truly inspiring, especially the Revolutionary War-esque painting  with Santi White in place of a rich, white dude. 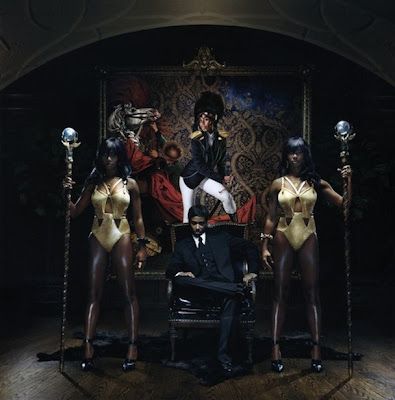