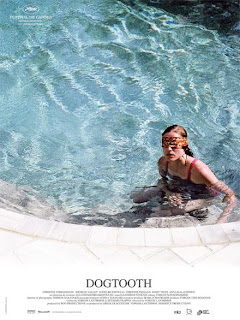 I love foreign films, especially the oddball European indie flick intended to shock, sans the sensationalism that accompanies many American films of a similar nature. Some Asian films (like Oldboy and Audition) provide shock value of a gory and sickening nature, but the European films I've seen often create the same reaction by way of a psychological complexity and overall minimalism: from having next to no score, to lingering on an image, to creating unsettling juxtapositions, to having events unfold in unexpected ways or otherwise ordinary settings.
I'm thinking of some films like Benny's Video, Funny Games, Fat Girl, 4 Months 3 Weeks 2 Days, Let the Right One In, This Is England, Salo, and The Dreamers (among others), all of which counteract expectations and tackle subject matter or happenings generally considered taboo within American film. Taboos like children killing others, or others killing children, a thirteen-year-old's sexual urges, anal sex, illegal abortion, young relationships, racism, sadism, incest, etc. Not that these subjects aren't handled in some American films, but there's a certain starkness I've noticed in films from France, Germany, Romania and elsewhere in Europe -- a definite lack of true exhibitionism. Disturbing things seem to occur in these films because they need to change the characters, not because the director wants the audience to react to them (except for maybe The Dreamers, which is more American than not, despite its Italian director).
Since I am obviously a fan of these movies, I was excited to watch Dogtooth, a Greek film directed by Giorgos Lanthimos, released in 2009. It definitely lived up to my expectations in terms of being bizarre! Here's a general gist: two very twisted parents seek to protect their three children (two girls, one boy, we don't know any of their names) from all the various evils of society. This might have worked better when the kids were younger, but now they're full-grown adults, probably between seventeen and twenty. They don't go to school, watch TV, listen to the radio, read the paper; they don't have any way of knowing what the outside world holds. And why, you might ask, don't they just leave the family estate? Well, their father has convinced them that cats and other vicious beasts are waiting to tear them apart just beyond the fence of their property, so they don't dare set one foot onto the dirt road, and they practice barking like dogs in case they need to scare a beast away. Only the father has the ability to leave in his car; he works a normal job, but no one there knows what kind of life he actually leads. He has also told his children that they will only be strong enough to leave home when their "dogtooth" comes out. Until then, they spend their days playing games, swimming, earning stickers for winning, learning new words (their mother invents meanings for commonplace words, like 'excursion'), and fighting as if they were still little kids. They even think it's possible for their mother to give birth to a dog. 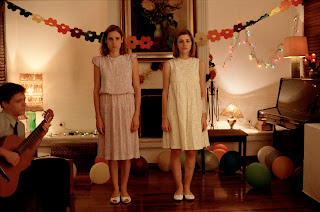 When we first enter into the world of this family, an outsider named Christina is brought into the home to fulfill the sexual urges of the son. She becomes an instigator of a series of events that end up changing the "tranquility" of this insulated life. Between Christina giving the eldest girl video tapes (in return for some "favors") that expose her to man-eating sharks and "She's a Maniac!" dancing, to the increasing sexual awareness between the siblings, to physical abuse on the part of the father, Dogtooth becomes more and more intense. We spend most of the film completely ingrained in this world, but also waiting for things to change -- instinctively, we know that something has to shake up the faux innocence because all of the conflict that comes from it isn't really conflict, it's just their way of life, and we're waiting for that BOOM to set us off on another path. The BOOM never really happens though, even in one particularly disturbing scene where it seems like it might.  Or, maybe the BOOM does happen, but we stop short just before knowing its full effects. By the film's end, I was left wanting  so much more. I definitely wouldn't put this film in my list of Best Movie Endings...but the lack of a definite ending didn't take away from how much I enjoyed getting sucked into the narrative, including those moments when I almost looked away.
-a.dupcak
Posted by amy dupcak at 1:51 PM