Alert alert! Please don't ruin these movies for yourselves, if you haven't seen them (I'll try not to give too much away where it really matters). Alas, here is a personal list of my very favorite endings...
1. Planet of the Apes (1968) - Charlton Heston bangs on the sand and cries, God damn you all to hell!! Without a drop of music leading into completely silent credits, this final scene literally takes your breath away, it's so fucking powerful. I declare it the best ending in all of movie history. And really, who saw that twist coming!? 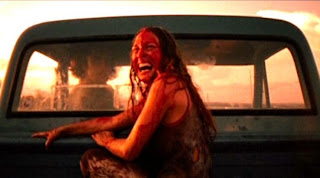 2. Texas Chain Saw Massacre (1974) - Sally, our "final girl," finally escapes the tortures of Leatherface and his cannibalistic family; she hops into the back of a pick-up truck just as Leatherface swings his chainsaw, in utter frustration, up toward the morning sun. Having survived her ordeal, Sally laughs hysterically, completely covered in blood.
3. Dancer in the Dark (2000) - One of the most gut-wrenching and painful endings I have ever encountered, and the reason why Bjork will never make another film. You probably shouldn't watch the following clip before watching the film...

4. The Shining (1980) - After a suspenseful and surreal chase through the snow-covered maze outside the Overlook Hotel, young Danny finally escapes his psychotic, ax-wielding father. The next morning, we see Jack Nicholson frozen dead, forever stuck in the maze. Then, the camera zooms in on an old picture of people inside the Hotel's ballroom, and guess who stands among them!

5. The Wicker Man (1973) - Though the cult-ish lure of the songs, costumes, pagan ceremonies and  master-of-horror Christopher Lee are enough to draw one in, it's really worth making it through this quirky film for its ending. Let me just hint that it involves a giant wicker man, and a ritualistic burning. Wicked!


6. Lost in Translation (2003) - Two characters, both unhappy in their marriages, meet in foreign, florescent Tokyo and form an unlikely bond. Soon they must return to their own lives, and their own "loves." Jesus and Mary Chain's "Just Like Honey" perfectly accompanies this bittersweet scene; an absolutely perfect ending for an ambiguous "affair" that exists somewhere beyond the realities of everyday life.
7. Once (2006) - Here's another bittersweet ending involving love that never gets off the ground; or perhaps love versus "reality." After creating a magical record together, these two unnamed characters part ways, but the man buys the girl (too poor to afford one) a piano. As she plays it in her home, she stares out the window, remembering him. Can you tell I like realistic, non-melodramatic endings?
8. District 9 (2009) - So our main guy, for whom we are rooting, eventually succumbs to his "illness." The life he once lived in South Africa is destroyed, but not before he helps save the lives and fates of the creatures he now lives among. In the very end, he creates a flower for his wife, who can only suspect that he is the one who, somehow, keeps leaving them on her doorstep. 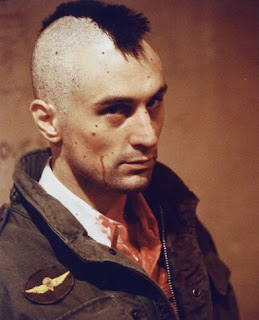 9. Dog Day Afternoon (1975) - Tense is a perfect way to describe this film, based on true life events. When Pacino exits the bank he's holding hostage and shouts "Attica! Attica!" with raised fists, you're completely on his side, even though he's a criminal. After a very long day and night, he and his partner Sal are finally getting what they want...or so they think. You can literally feel their sweat dripping down your face as you watch.
10. Taxi Driver (1976) - I wrote about this for a film paper in college, so here we go: In the last scene, where Travis (De Niro) is back in his cab, he very quickly glances in his rear-view mirror. For about two seconds, he turns the rear-view mirror to face himself, and we see his reflection. His face is cast over with red light and he appears startled, but then everything seems normal again. For a split-second, he realizes once and for all that he is like everyone else; the violence and disgrace of the city through which he drives have manipulated him, too. For once, he is not looking at someone he can judge in the back seat, but only at himself.