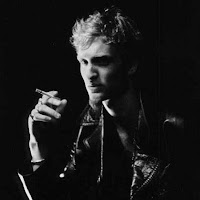 April 5th, man...both Kurt Cobain and Layne Staley died on this day. Both were born in 1967 in Washington, to parents who would divorce when they were around seven; both front men of important and influential '90s grunge bands; and both also poets whose pain and disillusionment came through in their lyrics, stage presence, and not-so-clandestine addictions.

In 1994, after taking three times the "recommended" dosing of heroin, Cobain shot himself. In 2002, after ingesting a speedball of coke and heroin, Staley, who had been secluding himself for some time, fatally overdosed. Both men were discovered several days (in Cobain's case three; in Staley's fourteen) after death, and both were mourned greatly by the public and the music industry at large. Perhaps neither thought they would become linked to the other in such an obvious way, but I think comparing the two artists doesn't merely rest on their joint deathdate, eight years apart. 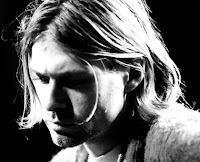 And now to get personal: I remember when Layne Staley died, though I don't recall exactly what I did. I don't remember when Kurt Cobain died, but I recall what I did when he became a part of my life. Every April 5th, I listened to his music and sort of celebrated his soul (including Staley's after 2002.) I remember the 10th Anniversary of Cobain's death, when NYC's K-Rock (rip) played all of Roma without interruption, as well as other live Nirvana performances. I listened all night, lying on my floor. One of my professors was originally from Seattle, and she went back there for that April weekend. She bought a Seattle newspaper, with Kurt on the front page, and gave it to me during class.
Trying to describe how important Cobain and Staley (but especially Cobain) have been to this person I've become would take way more effort than I dare put into it...so without further ado, here are Cobain and Staley performing on MTV Unplugged. Both of these performances should be considered among the absolute highlights of their careers, especially since both artists were incredibly proud of their singing during these sets. I can think of no better musicians who expressed themselves, and all that inner turmoil, in such deeply raw and beautiful manners. It isn't "magic" though; it's sheer authenticity.