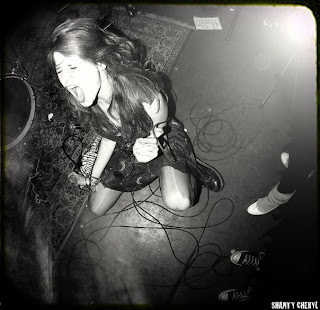 Shayne Eastin is one very rad grrrl. Onstage, performing with her punk band Spider Problem, she all but breathes fire, throwing herself in time with the drums, bass and guitar. Whenever there's a microphone in hand --- whether she's playing The Viper Room or someone's garage or basement --- Shayne's all loud vocals, messy hair, dirty boots, ripped tights, and bloody knees.

An LA native, she's very much in love with her West Coast culture, living a million lives in one and keeping herself busy with projects both musical and otherwise. Spider Problem is just one band that's currently showcasing Shayne's talent, passion, and rock n' roll inspiration, as she Iggy Pop's it up. The band's newest album, Retro Amusement, will be available on vinyl through their Bandcamp Website on August 1st with, pre-orders available sometime in mid-July. I was very lucky to meet Shayne a couple years ago when I was staying with the band 100 Monkeys in their LA abode, and it was my pleasure to reconnect with this admirable rockstar by asking her some questions. Read on!

No-Alternative: I know you started as an actress and then segued into singing for Spider Problem. Can you talk about this transition, and how music took over your life?

Shayne Eastin: My whole life I was involved in Theater and Choir Programs in school. It was a great escape for me, especially in high school when I was dangerously depressed. I went to high school in Illinois and would fly to Los Angeles every summer to visit my dad. I begged him to let me audition when I was really young and eventually I was cast in some commercials, TV shows and plays.

When I turned 18, I had the realization that I only wanted to be involved in projects I believed in and I didn't want to endorse products or shows that I considered harmful or demeaning. I felt like I really wanted to tell my own story and I truly missed singing and writing. I started taking some photography classes and landed a pretty sweet job in a photo studio while I tried to put together a band.

I sing in Spider Problem, and I also sing and play guitar in El Ron's Cupboard --- that's more of a jazz influenced psychedelic sound and we play at the Rainbow Room on the Strip once a week (usually a Tuesday or a Thursday). Plus I currently sing and play ukelele in a vaudeville act with Liberty Larsen called the Goodnight Ladies. We sing very old jazz standards and tell jokes. Can't have enough music in my life. Things do tend to come full circle though…Spider Problem and I have been cast in a film about a broken down punk singer!

How would you define your music, and do you ever consciously try to change what your fans, or anyone else, might expect?

I think if the music I wrote were a star sign, it would be an Aquarius Sun, Pisces Moon and Aries ascendant. I try to be direct, universal, and intuitive. God, do you know how hard a question like this is?! To be honest, I always try to grow and evolve as an artist, but I never think about what my fans or peers might expect. I am very grateful to have so many people that support me and my music and I always do the best I can, but I don't have time to worry about what people expect of me! 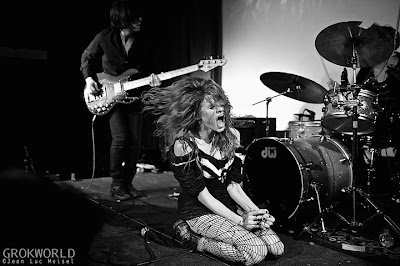 You're known for flinging yourself around stage and sustaining some injuries in the process! Can you describe what this feels like? How do you generate such indestructible energy?

No performance is the same and I usually just feed off of the crowd when we are playing live. I love playing in front of an energetic audience and a lot of the Spider Problem songs are really aggressive and about issues that I care about. I just try not to think about it and do what comes naturally. Adrenaline really numbs pain, so sometimes I have to check myself. I can't really afford to end up in the hospital.

I've gotten to play a lot of really amazing venues with some incredible bands. For some reason the first show that comes to mind when you say memorable was a house party we played in Northridge about six months ago. Driving there, we had no idea that the place would be packed beyond belief. Everyone at the party was munching on pot brownies and, when we played, the house started shaking and the floor was swaying. Some kids started moshing and everything went to hell (in a good way). As far as stage injury goes, when we played with Rocket at the 3 of Clubs I managed to get this insanely huge bruise on my thigh that looked just like Jesus, but I didn't report it to the Vatican.

I know you've toured with at least one other band...what do you love most, and hate most, about touring?

Love most: Playing music every night and watching the horizon slide by the van window.
Hate most: Missing my cat.

Let's discuss the new album, Retro Amusement. How is this different from your earlier work? What themes, emotions, and general attitudes are present throughout these nine songs? And did anything specifically inspire your band while recording?

We recorded Retro Amusement ourselves in an abandoned warehouse in Downtown LA. It's been described as melodic, dynamic and raw. I like to think of Retro Amusement taking place in a defunct old theme park. It touches on some Big Brother post-apocalyptic scenes and the album ends with a track to inspire hope and as sort of a preview of a newer direction for us.

Do you think that growing up in California has influenced your music and creativity? And do you feel like you're part of an artistic, musical, or subcultural community in LA? 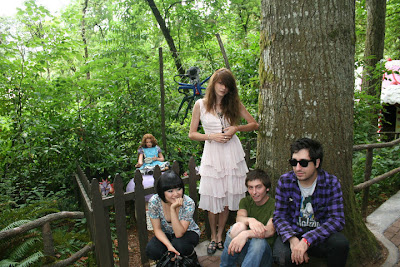 Absolutely. I'm in love with Los Angeles. I feel so lucky to have been born here. Everyone is so genuine and kind because it's easy to truly relax here and let your mind go. There are so many unique and talented musicians in LA and we all support each other. It's pretty cool when the people you admire are people you get to work with and play with.

I know you swim in open-minded circles, but do you ever encounter sexism in the music world, and does being a grrrl rocker ever become an issue --- however big or small?

You know what, yes. There is sexism in the music world just like there is sexism everywhere. But don't dwell on it. Just keep kicking ass and doing what makes you happy. Always stand up for yourself if someone is mistreating you, disrespecting you, or threatening you, but don't let assholes waste your time. Stay dignified and let the haters stew in their own bullshit.

Say I'm going to come to LA again to visit you (yay!), where would you take me?

Rad! We'd go hiking in Fryman Canyon in the morning! It's off of Mullholland Dr. and when you get to the bottom you can see some cars that careened off the road and fell into the canyon. They are all beat up and grown over with weeds. Then I'd take you to Clifton's Historic Cafeteria downtown. The inside is decorated like a woods scene and Walt Disney used to eat there…a lot of people say that's where he got his inspiration for Disneyland. After that, I'd take you to all of my favorite thrift stores in the valley and we'd end the night by probably catching one of my friends' shows. Please come and visit! It'd be so fun!