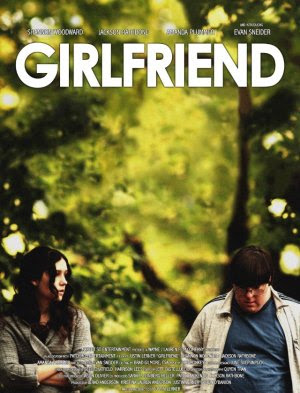 Earlier this week, I went to the Quad Cinema to catch the NYC premiere of Girlfriend. My initial interest in the film was spawned by friends who helped bring it to life --- members of the band 100 Monkeys produced, starred in, and scored Girlfriend, which also featured a song (for a mere few seconds) by my/our deceased friend, Spencer Bell. But friends involved in the project aside, the movie struck my interest on its own terms, as it's about a guy named Evan (in both life and the film), with Down Syndrome, attempting to romantically pursue a girl he loves, or thinks he loves.
As I had hoped, the film is more complex than a cliche boy-with-disability-shoots-for-love-or-greatness narrative. The characters in writer/director Justin Lerner's film are deeply flawed --- from the object of Evan's affection, Candy, to Evan himself, along with his drug addicted mother and the men in Candy's life. In fact, the only innocent character is Candy's young son, Simon. One particularly poignant moment occurs just before Candy's two "lovers" (played by Jackson Rathbone and Jerad Anderson) end up in a fast-motion fight --- Candy runs into Evan, who was dragged to the party by two "friends," and Evan looks her dead in the eye and asks, "Who's watching Simon?"
Evan graduated high school with Candy some years ago, and he has always "loved" her. When she asks him why he likes her, he replies, "Because you're always nice to me, you were the prettiest girl in our graduating class, and I always thought we'd make a good girlfriend and boyfriend." Evan, who has never even been kissed, is very aware of the limitations set forth by his Down Syndrome (at one point, he even says, "Sometimes I wish I could escape my body"), but that doesn't stop him from hoping for true love and continually attempting to sweep Candy off her feet. While the film leans toward comedic, albeit a bit despondent, at first, it soon becomes dark when Evan's mother, the only constant figure in his life, passes away. Now on his own, Evan must take care of himself for the first time, while also trying to help Candy through her financial and emotional problems. 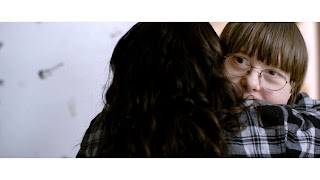 When Candy gets evicted from her house and moves in with Evan, who has been gifting her with money from his mother's will, she goes along with his notion that she is his "girlfriend," placating him so he won't feel hurt. The scenes between Candy (who uses sex, or the hint of sex, as a form of power, as well as payment) and Evan vacillate between quirky, oddly romantic, and downright uncomfortable. Candy can't come completely clean with Evan about her intentions, and Evan has no idea how to properly handle his feelings. To make matters worse, Candy's ex/Simon's dad, bad boy Russ, is still very much in the picture. He manipulates Evan to get information about Candy's love life and maintains a sexual yet abusive relationship with her, which directly affects Evan.
The nice thing about Girlfriend is its level of realism. There is no one message to take away from this tale of betrayal. It's just a big ol' mess of emotions and white lies that blurs the line between the right thing and the wrong thing. Is it right for Evan to impose himself on Candy and ask for sex, since she's his "girlfriend?" Is it right for Candy to take Evan's money? Is it right for Russ to go behind Candy's back? These are young-ish people trying to hold onto their broken pride and hopes for the future while making lots of (sometimes grave) mistakes along the way. . .in other words, this is no cutesy love story. 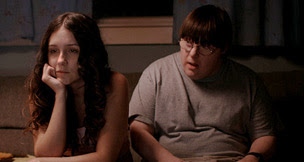 The ironic thing about all this, however, is that in the Quad Cinema's Q&A session following the screening, Justin Lerner made it seem that Girlfriend was a film about "the nature of love," and that Evan was absolutely pure in his love for Candy. To me, this was an extreme over-simplification and didn't do his own film justice. I can understand his possible concerns about portraying a character with Down Syndrome in a less than positive light, but the fact is that Evan's love for Candy was not some sweet, harmless thing. Evan wanted to lose his virginity, and Candy was the object of such longing.

Films about disabled characters (like I Am Sam, for example) tend to portray said characters as the epitome of everything good and innocent. But, Evan is a man, not a child, and it's refreshing to see him make poor choices too. In this way, Girlfriend reminded me more of a Todd Solondz film...his films, although usually disturbing, are much more thought-provoking than the likes of I Am Sam. Then there's Crispin Glover's arty film, It Is Fine! Everything is Fine!, which was written by a man with cerebral palsy who chose to play a serial killer...with cerebral palsy.
Within the Q&A session, Lerner chose not to fully comment on his choice of the ending, which speaks to his obvious sensitivity to both his character Evan and perhaps his real-life friend Evan. But his ending (much like Solondz's Palindromes) is one that leaves room for further questioning, and not just his directorial decisions, but also the intentions and actions of the characters. Candy and Evan will not live happily ever after, no, but they're both in a better place than they started. Or, at least, in some ways they are. Once again, the beauty of this film is its many layers and meanings...while in some ways they are happier, in other ways we just don't know.

May I just add, too, that the acting in this film was incredible, especially on the parts of Evan Sneider and Shannon Woodward. Truly incredible. It is also beautifully shot, smoothly paced , and very rich in nature.