Girl with the Dragon Tattoo....wait a minute. 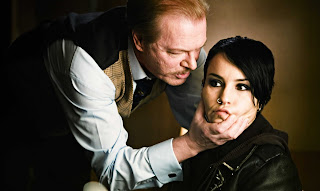 Confession: I have not read Stieg Larsson's ridiculously popular Millennium Trilogy (probably for that reason), though I've seen people reading it on subways galore and I've watched all three Swedish films. Since I have not devoured the actual pages, I suppose I can't be too much of a purist, but whenever Hollywood decides to puts its flashy stamp on a foreign film I enjoy, I can't help but feel defensive. I mean, is it that difficult to read subtitles and to expose yr ears to another language? Tisk tisk, America.
Anyway, the three Swedish films are absolutely killer (ha!), particularly The Girl with the Dragon Tattoo (as the trilogy continues, the storylines get more and more far-fetched). Noomi Rapace was perfect as Lisbeth Salander --- the antisocial, bisexual, goth-punk-tattooed computer hacker with a devastating past and fearless, icy demeanor. In David Fincher's version of the trilogy, the role of Lisbeth goes to Rooney Mara who, incidentally, is the first cousin of my sister's first boyfriend. New York is a small world.
Now, I respect David Fincher as a director, and of course I am thrilled that Trent Reznor is doing the score, but I really doubt that the American makeover is a) necessary or b) in any way better than what Sweden already successfully offered. Nor am I thrilled about Mara as Lisbeth. Nothing against her, but if I had been directing said film, I would have gone for a girl who was more...hardcore. Reportedly, Mara's "long brown hair was cut short and dyed black, in a style reminiscent of 1970s punk and 1980s goth fashion. She also had each of her ears pierced four times, and had her lip, brow, nose, and nipple pierced for the role. Her eyebrows were bleached, and she wears a temporary dragon tattoo." She also had to learn how to skateboard and ride a motorcycle.
Here's my feeling about all this...isn't it possible to find a chick who already has piercings and is legitimately involved in the sort of underground subculture of the character? I get that this is a movie and that Mara Rooney is (method) acting, and maybe I'm just sensitive about alternative cultures becoming exceedingly mainstream and watered down to suit the masses, but I just don't buy it...and buying into the character is pretty fuckin' important. Granted, I have not seen the film. Granted, Noomi Rapace may not have been a genuine cybergoth either. And at least the role didn't go to Kristen Stewart! But the fact remains that reading about Mara's "transformation" just makes me groan. 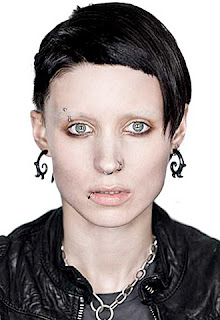 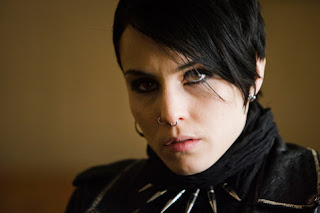 You make the choice.

Email ThisBlogThis!Share to TwitterShare to FacebookShare to Pinterest
Labels: film, girl with the dragon tattoo, subculture