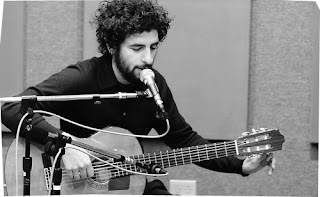 Sometimes you discover an artist and cannot believe they haven't been with you for the past few years. Such is the case with José González, whose music would have perfectly suited many personal moments since he released his debut LP, Veneer, in 2003 (though it didn't come stateside until a few years after).
And, sometimes you become so familiar with a particular song that you cannot believe it when you discover it's a cover...or, a song you love takes on an entirely different meaning when placed in the hands and voice of another musician. Therein lies some of José González's magic (side-note, he also sings for the band Junip, though it's his Elliott Smith-esque solo work that really strikes something deep). Somehow, José -- who is Argentinian but grew up in Sweden -- can take electronica tunes and soften their sharp edges, while still retaining their potency. On Veneer, he transformed fellow Swedish band The Knife's oh-so catchy "Heartbeats," and on his second solo album, In Our Nature, he took on Massive Attack's most well-known tune: the moody and sensual "Teardrop."
I am already a bit obsessed with good cover songs, which are actually pretty hard to come by, and I only wish I'd known José González when I made this list of best covers in 2010. The wonderful thing about his versions of "Heartbeats" and "Teardrop" is that they are in no way comparable to the originals, so both versions can exist separately, in harmony. It's as if he swallowed these songs, digested them for awhile, and then spat them out acoustic-style with parts of his musical soul firmly attached. And that voice...oh what a voice.
Another new discovery is José's song "Down the Line" from In Our Nature...a song which I had actually attributed to The Gutter Twins, as it appears on their first album, Adorata. But how wrong I was! Here, The Gutter Twins covered José, and while they certainly worked their own hard-rock magic on the track, the original version wins the beauty contest.
So now, compare...and then do the same with "Teardrop":
-a.d.
Posted by amy dupcak at 12:50 PM