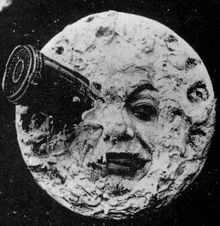 What do a science-fiction film from 1902 and a '90s alternative rock band have in common? Well, you probably already know. The Smashing Pumpkins' music video for their ultimate lullaby, "Tonight Tonight," off of my favorite album of theirs, Mellon Collie and the Infinite Sadness, borrows from Georges Méliès' classic film, A Trip to the Moon. Méliès wrote, directed, produced, and even starred in the fourteen-minute film shot on 16mm. Groundbreaking at the time (it was made over one hundred years ago!), it's generally considered the first sci-fi film.

Fast-forward to 1996 when directors Jonathan Dayton and Valerie Faris got the idea for the "Tonight Tonight" video because Mellon Collie's album cover reminded them of early silent films. The resulting video, with the Pumpkins fancied up, flickering, and floating on clouds, plays with the themes and happenings in A Trip to the Moon, and also provides romantic, surrealistic visuals that perfectly suit the song, as well as the Pumpkins' evolving aesthetic. I love how the woman starts hitting the aliens with her parasol and when they blast off and fall into the ocean, all of which more or less occurs in the silent film.  The video was also filmed in the general style of A Trip the Moon, with painted backdrops, theatrical costumes, exaggerated expressions, and "primitive effects" to make it look antiquated.
Smashing Pumpkins - Tonight, Tonight by popefucker
Posted by amy dupcak at 8:22 AM