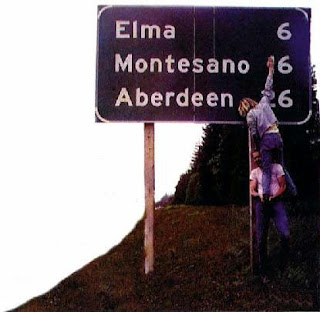 Anyone who knows me knows how heavily Kurt Cobain has factored in my life. But maybe you don't know how that came to be. Today, on Kurt's 45th birthday, I thought I might try to figure out, for myself, how and when and why he made such an impact....

It all started in sixth grade. Prior to this, I was more of a pop girl, like most kids. In early elementary school, I was obsessed with Madonna and Michael Jackson, since I grew up listening to them in the mid-to-late '80s and early '90s (I do still stand by how great those songs are). Even though my dad was a jazz keyboardist and my mom was a huge Beatles fan, I wasn't exposed to much of that music. Instead, I listened to the car radio and thus heard music that was popular at the time. I also really liked The Cars (and, um, Ace of Base!).

Enter sixth grade: 1995. Alanis Morissette released Jagged Little Pill, which was essentially the beginning of my 'alternative' fixation. I didn't understand the depth of emotion in some of her songs, but I had inklings. One girl in my class, Christina, was a little more "advanced" than the rest of us. Our teacher let us play songs in class and share the lyrics, and Christina shared Nirvana's "Smells like Teen Spirit" and Hole's "Miss World." In our Catholic school classroom, I followed along with the lyrics. Holy fucking shit, I thought. This is awesome. I didn't know what "libido" or "mulatto" meant; not that it mattered. I knew that Kurt Cobain had killed himself, but it hadn't meant anything to me before...what 10-year-old would have gotten that, anyway? 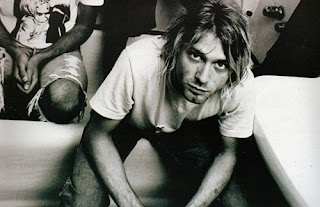 So those two songs, perfectly coupled, etched themselves in my brain, though I didn't understand why. There was just something about them... something raw and broken and perfect, something that spoke to my future self, the self I wanted to be, or the self that was already taking shape. I saved those lyrics and, the next year, they wound up in a binder I kept under my bed: a binder I filled with poems and lyrics and other things I liked. Not long after, I bought Nevermind on cassette and listened to it on my Walkman. Live Through This would follow.

When you're a girl in junior high --- at least in my case --- you need something that represents you as an individual and also as a member of your particular social group. Nirvana would become that something. Christina was so "cool" that she kind of stole the show, but her something was Pearl Jam, while my best friend Rachel's something was The Smashing Pumpkins. By eighth grade, my friends and I were fairly well versed in '90s alternative culture, even though we were all born too late to appreciate grunge in its prime. We got the leftovers of that era...but those leftovers were good enough. We were also getting into classic rock, each in our own ways. You could find us eighth grade girls sitting in a circle on the grass, Christina and Rachel playing "Stairway to Heaven" on their electric guitars. While my sister + friends danced around to The Spice Girls, we were the hippie class...and we would be remembered as such.

Getting back on track, it was really ninth grade that amplified my love of Nirvana/Kurt and turned it into a bona fide obsession. By then, I owned all of their albums on cassette. I started "decorating" my bedroom with Kurt's face, turning it into some kind of shrine. I wrote Nirvana lyrics on everything --- "Let down your umbilical noose so I can climb right back" --- and I read books and watched videos about Kurt's life, buying pretty much anything I could learn from. 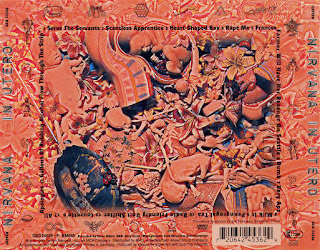 Tenth grade was another turning point, since it was depressing as hell. The songs with which I was already so familiar took on new meanings and burrowed deeper in my heart. Kurt's symbolism sank into my poetry, and I took an interest in the things that had interested and inspired him...I read William S. Burroughs because he was Kurt's favorite author; I read Perfume because the song "Scentless Apprentice" was based on it; I bought little turtle and seahorse objects because Kurt liked and related to those creatures; I listened to The Vaselines and The Meat Puppets and The Melvins and other bands Kurt liked, covered, or performed with; I tried to learn Nirvana songs on the guitar; and I named things after his songs: "Polly," "Marigold," etc.

In other words, you couldn't get much more obsessed with Nirvana than I was, from tenth grade until sophomore year in college. Kurt Cobain helped me define myself; he served as a comfort and an inspiration. His voice (among others) was my personal soundtrack for many years.

When I started dating a boy named Jason in eleventh grade, I ended up getting him back into Nirvana too. He was the one who bought me the acoustic guitar on which I learned those few Nirvana songs. Jason and I loved to wander around flea markets and conventions and stores where we could find rare items for our personal collections --- for him, it was horror films; for me, it was Nirvana bootlegs. So in Generation Records and Stormville and a bunch of other places, I pieced together all 6 Outcesticide CDs, plus recorded live shows, interviews, singles, b-sides, imports, and I also re-bought their albums on CD. I got the import In Utero CD with "Gallons of Rubbing Alcohol Flow Through the Strip" listed on the back. I bought No Alternative (so now you know!), on which a secret Nirvana track exists, and the DGC Rarities compilation album on which "Pay to Play" (an early version of "Stay Away") exists. I knew all of the tracks that had multiple names, and I knew all of the names Nirvana had once used, and well, I knew a lot! By the time the Nirvana box-set, With the Lights Out, was released, I already owned many of those songs.

My knowledge grew when Jason surprised me with tickets to Seattle! As an East Coast grrrl, I had never been that far west. I started preparing what I would deem my "pilgrimage." I planned our entire trip and managed to find addresses to some important locations, mostly thanks to Heavier Than Heaven. So in June of 2003, we squeezed an incredible journey into six days, visiting Aberdeen, where Kurt grew up. We went "underneath the bridge, where the tarp has sprung a leak." We visited houses where Kurt lived or just crashed. We even visited his schools and walked through the halls (though his high school had burned down). Of course, we visited the house where he killed himself, and wrote on the bench where people had left flowers. In Aberdeen, we found an unsuspecting muffler shop that housed an elaborate Kurt statue that the town refused to erect in the park. The trip was highly emotional for me, more so than I even expected. All of these names and places I had read about for years were suddenly in front of me. I took nineteen rolls of film, enough for two albums. It was...intense.

You could say this was the peak of my obsession, though sophomore year of college continued the trend. On the tenth anniversary of his death, I listened to KRock all night long as they played the entire Roma (live) album and other songs. One of my teachers, who was from Seattle, gifted me with a Seattle newspaper about the anniversary. Another one of my teachers (for a sociomusicology class), allowed me (with some hesitation) to write my conference paper about grunge culture, generation X, and how Kurt Cobain became an inadvertant icon. The paper ended up being 40 pages long, with about 40 sources. It consumed me, but I loved working on it. If there was one thing I had become an "expert" in, this was it. Between that paper and one for the Seattle-teacher about "the concepts of zero and infinity in medieval science and religion," it was a brutal semester!

Eventually, my Nirvana obsession slowed down. Naturally, I wasn't only listening to Nirvana this whole time, and other bands and artists who were both similar to and completely unlike Nirvana swirled around in my ears. After my friend Spencer Bell died in 2006 and his music gained followers who had not known him personally, I had to sit myself down and question my Kurt fandom. No, I did not actually know him. What I do know about him comes from what he wrote and sang and painted and said and did, and from what others said about him. No, I am not actually an expert on who Kurt was as a person.

But, getting to "know" Kurt, along with other artists/poets/musicians, taught me more about me. He allowed me to bond with others, to express myself, and to explore my own creativity. The biggest thing Kurt taught me -- and something I continue to value --- is authenticity. His music, if nothing else, is authentic in its origins, its delivery, and its power. I will always be the kind of grrrl who values the authenticity that grunge culture, and Kurt himself, inherently represents. And I will forever remember, from a sheet of lyrics in sixth grade, that "Smells like Teen Spirit" contains nine "a denial's."