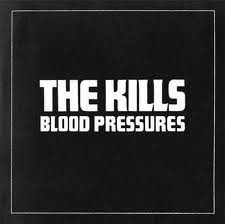 To be perfectly blunt, The Kills are cool as fuck. I doubt many rock fans would disagree with that statement. Jamie Hince and Alison Mosshart have proven themselves to be one slick duo, most notably on Midnight Boom, released in 2008. From the lyrics to the beats to the sometimes deadened vocal delivery, it was one of the coolest albums released that year. Now, three years later, The Kills are back with Blood Pressure...still cool, still rife with sexy beats and daring rock n' roll riffs, but can it compete with the joy ride that was Midnight Boom, which, for me, was rather like an album full of Iggy Pop's "Nightclubbing?"

The Kills are inspired by a mutual obsession with The Velvet Underground, ‘70s London and New York punk, as well as bands like Cabaret Voltaire and Suicide. They're into that stripped-down, No Wave, mildly synthetic but still garage-y sound, and Blood Pressure showcases these musical passions. The record reaffirms that they're "bringing romance and sex and glamour back to rock ‘n’ roll"...but topping an A+ album like Midnight Boom is a difficult endeavor. For me, Blood Pressure is one grade lower, though still completely admirable.

The album kicks off with four bold tracks, and "Future Starts Slow" is almost as alluring as Midnight Boom's opener, "U.R.A. Fever." With the duo blending their slightly raspy voices, it feels like you're putting on a leather jacket and heading out into the blackest night --- and not just because that's the central image of their music video for "Satellite." The guitars on this opening track jab at you, especially when they're at the forefront of otherwise minimal instrumentation that gradually becomes denser, until the thick drumbeats peter out...segueing, via mechanical noises, into "Satellite." Even though it's the album's single, and therefore the most obviously good, "Satellite" really is a gem. "Cool" doesn't even begin to describe it. We've got vocals layered atop vocals, and Mosshart's "oh's oh's" gliding across a marching, neo-industrial backdrop. "Heart Is A Beating Drum" continues the band's riveting mash-up of electronic-meets-organic, with a fuzzed-out guitar taking a backseat to more dynamic and prominent vocals, courtesy of Mosshart.


But then we dip into "Wild Charms," sung only by Hince. Slow and sleepy, it's just 1:15, but that's long enough to disturb the momentum. It would have been better as a bonus track...though it does lead nicely into "DNA." At this point, Mosshart's vocals become too front-and-center, and the song's starkness doesn't serve the song. However, a catchy chorus and crunchy guitar solidify the track's edginess, so all of its fragmented pieces seem to slowly fall into place. "Baby Says" is another melodic gem --- certainly the album's cutest --- and the guitar riff elevates its retro charm. "Last Goodbye" comes next...and I, for one, find it unlistenable. It sounds like Marianne Faithful with a sore throat, playing a few notes on a piano. What is it doing on this album?


The last three tracks aren't quite as interesting as the first, and "You Don't Own The Road" sounds a lot like "Heart Is A Beating Drum," but the finale, "Pots and Pans," is rather beautiful --- like an asphalt sidewalk that sparkles under the streetlight. The melody leads us through experimental noises that literally sound like pots and pans being hit by hands, or maybe by spoons (recall the telephone noises on "U.R.A. Fever"). It's got a country thing going on too, even through its rock n' roll veneer, and as the instruments get louder and Mosshart's voice begins to recede, you're content in lingering in all of that reverberation, until it fades out.
-a.dupcak for BRM.
Posted by amy dupcak at 9:35 AM