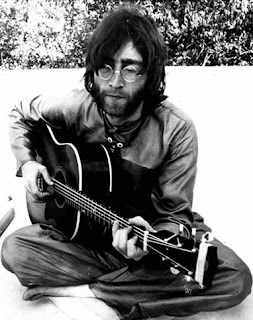 "God" is one of the most controversial songs of John Lennon's controversial career...though my former religion teacher, who had a big issue with "Imagine" of all things, probably never heard it. Let me explain that story real quick --- it was the year 2000 and "Imagine" was just deemed the song of the millennium. My tenth grade religion teacher told my class that she "hated that song" simply because of the line "imagine there's no heaven" and the bit about "no religion too." Her reasoning was that "of course there's a heaven!" I raised my hand and said, "But he's saying IMAGINE!" And not only that, but one of the points of the song is that we all need to experience and appreciate the here and now rather than worrying about the afterlife and such. I can only "imagine" what she would think about "God."
The thing about "God" is that it really showcases another side of Lennon. He was often seen as extremely optimistic, uplifting, energetic, and peaceful --- which certainly isn't untrue. But John wasn't always a dreamer; his feet were also planted on the soil (especially that of New York) and he was very much aware of his image and his impact. When The Beatles broke up and the world collectively sobbed over that musical departure, John swiftly took off on his own path, creating an album with wife Yoko called John Lennon/Plastic Ono Band. No album could be more truthful.
For months after the great Beatle break-up, John and Yoko underwent primal therapy, which strongly influenced the lyrical content of John's first solo album. He explored many personal psychological demons (rather than world issues for which he was better known), such as abandonment by his mother, his former issue of class, and his "renouncement of external saviors." John's trip to India with his fellow Beatles, and the resulting magic of Sergeant Pepper, was largely understood as a spiritual quest and a fountain of inspiration, but in "God," John professes what he doesn't believe in, rather than referencing what he does. Something about this, at least to me (and maybe in my current state of migraine) feels even more honest.
In "God," John denounces everyone from Hitler to Jesus (and back-to-back too!), as well as JFK, Elvis and Bob Dylan. All of these figures might be considered "gods." He also denounces elements of Eastern faith, such as Buddha, mantra and yoga, as well as the New Age practices he formerly embraced. The main point of the song, though, isn't to tell listeners what they should or shouldn't believe in...it's to profess that he believes in himself (and his right hand, Yoko) and not in the people and objects and practices in which people try to find themselves. Therefore, we too need only believe in ourselves. 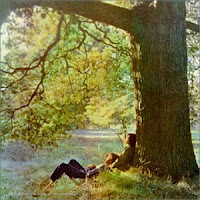 The dream is over because The Beatles are dead, and now the only person John really has is John (once again, and Yoko...talk about love). He used to be the walrus (though I thought the walrus was Paul!), but now he's really and truly just John: reborn, rebuilt, maybe even re-imagined. He tells his fans and friends to carry on, and though the song ends with the rather dismal "the dream is over," it feels like a thrilling reality is just beginning and a veil has been lifted --- the heart-wrenching sadness is actually a reward, not a punishment. If The Beatles were God, or as John once said, "more popular than Jesus," then that God is now dead...but the good news is that all of us can keep on living.
Released on December 11, 1970 (almost exactly 10 years before John himself would die), "God" is delivered in a minimal, no-thrills fashion, with the lyrics jabbing you as each new line comes. It is beautiful, painful, raw, and deeply felt.