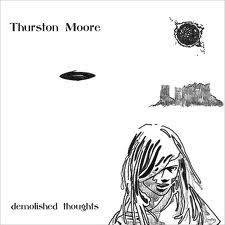 Thurston Moore is a master songwriter --- solo, in collaboration, and of course with Sonic Youth. His brand new album, Demolished  Thoughts, is yet another testament to his immense talent.

Moore has the ability to shift-shape --- he can rev up his guitar and break into voluminous distortion, or he can glide his fingers over an acoustic and whisper across its subdued sound. Demolished Thoughts --- even more so than his last solo record --- possesses the latter, with hints of his grungy, noisy, experimental past. Production by Beck is an added bonus.
At the start of the beautiful "Benediction," the album's opening track, I was more than happy to hear Samara Lubelski's familiar violin. She appeared on Moore's Trees Outside the Academy (2007), as well as in live performances. I happened to work with Samara at Kim's Video in NYC several years ago, and I've always been entranced by her emotive violin, which, along with a harpist, perfectly accompanies Thurston's whimsical melodies, stirring up the dust of something truly profound.
Demolished Thoughts is musical poetry, with neo-classic flourishes and an emotional, but not melancholic, weight. As with Trees Outside the Academy, the song titles are lyrical too, like "Blood Never Lies," "In Silver Rain with Paper Key," and "Illuminine." Most of the album feels hushed and fluid, but I particularly love those moments when the thoughts become "demolished."
While a song like "Blood Never Lies" is thoroughly peaceful, "Mina Loy" immediately pulls you into a darker setting. Here, Moore's guitar is hypnotic and witchy, reinforced soon by the gypsy-like strings. I can't get enough of this song's instrumental opening, pierced by a ghostly whisper right before Moore's voice further haunts the space. Certainly an album highlight! "Circulation" also starts off boldly, with guitars and violin charging as Moore's voice really takes off. "I'm not running away," he sings in the chorus --- echoing and full of tension, just like the riveting strings.
Demolished Thoughts is only nine songs long, but the album feels complete --- of course, Moore has long since mastered the art of knowing when to stop versus when to spiral out into an instrumental malestrom. And while the album could use a little more grit, feedback and destruction, in my opinion, it's nonetheless gorgeous. A perfect album for a rainy walk with your headphones.
-amydupcak.
originally posted on BRM.
Posted by amy dupcak at 7:54 AM