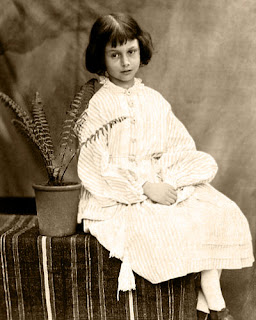 Who in the world am I?
Ah, that's the greatest puzzle.
-Lewis Carroll, Alice in Wonderland
May 4th is the birthday of real-life Alice, who led the world on many a chase through Wonderland. Born on this day in 1852, she came to know Lewis Carroll when she was a child. The two often spent time together, and sometimes Carroll took photographs of her (and other young girls).

On July 4 in 1864, Carroll, Alice and her two sisters rowed toward a picnic outing, and Alice requested a new story. Carroll (real name Charles Ludwidge Dodgson) had told her stories before, but this time she asked him to write down the epic tale. Months later, in 1864, he handed her a manuscript called Alice's Adventures Under Ground, which would become the illustrated Alice's Adventures in Wonderland the following year. Those famous illustrations by John Tenniel depicted a large-foreheaded, blond Alice who looked nothing like Alice Liddell, with darker and smaller features.

But Alice was certainly Alice, as is evidenced in many ways. For one, her adventures took place today, on May 4th (though this isn't mentioned when the Mad Hatter introduces his "unbirthday" idea). In Carroll's follow-up, Through the Looking-Glass and What Alice Found There, fictional Alice says she is "seven-and-a-half exactly," meaning that this story took place on November 4th, her half-birthday. Many other references point to the friendship between Alice and Carroll, as well as the origins of Wonderland, and an acrostic poem -- "A Boat Beneath A Sunny Sky" -- bearing her full name also appears in Looking-Glass.
Personally, I find all of this beautiful.
(and I am born on Lewis Carroll's birthday; January 27)
Posted by amy dupcak at 8:45 AM

Email ThisBlogThis!Share to TwitterShare to FacebookShare to Pinterest
Labels: alice in wonderland, fiction