In Defense of Girls 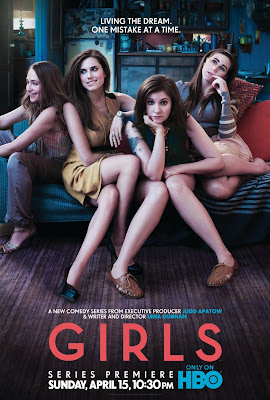 Last night I hosted a little impromptu Game of Thrones viewing party, after which we let HBO do its thing while we thoroughly (perhaps too thoroughly) discussed the episode. Along came the second episode of the show Girls, which prompted a totally different discussion, and then a full-on debate. It seems that the negative press the show's already garnered has really influenced public opinion...even if the affected people haven't actually seen the show. That, or they already have their minds made up for them.

As for me, I only saw half of the first episode and sort of "viewed" the second episode amid our rather intense debate, but I can honestly say that I like it so far, which is better, I think, then only seeing that much of the show and automatically deciding I don't like it. It bothers me that one of the only shows written by a young woman (who happens to remind me of Miranda July) is getting so much flack after only two episodes!

It would seem that people are annoyed at the show for a few reasons: 1) the lead cast is white, 2) the show is primarily about "white girl problems" or "first world problems", 3) the cast consists mostly of "famous" people's children,  4) the show is frivolous and just another version of Sex and the City, 5) Lena Dunham writes about her own life and casts her own friends, and who the hell cares?, 6) this show does not accurately represent Brooklyn.

I will now address these, point by point, from my own perspective:

1) Yes, the lead cast is white. Let's try to think of other popular TV shows, past and present, that have a mostly-white cast....hmmm....this is hard....Friends, Seinfeld, Frasier, Sex and the City (more on that in a bit), Cheers, Buffy the Vampire Slayer, 90210, Gossip Girl, Full House, Everybody Loves Raymond, shall I continue? Now, my point here isn't that it's okay to have a show that only focuses on or features white people, just that Girls isn't any different from a thousand other shows that include mostly white characters.

My point here is this: don't blame one show for doing something that so many other shows are just as guilty of.

2) Speaking more on race, there's that saying "white people problems"...that's what Girls deals with, right? So, because these characters aren't struggling with life or death situations, that means their problems aren't real and no one should care about them? This is flawed thinking for a few reasons. To say the show focuses on "white problems" means that we're automatically separating non-white people from white people and assuming that non-white people have more serious problems because of the "disadvantages" of their race. In a truly diverse and racially tolerant society, we wouldn't be categorizing people based on their race in the first place, or making broad assumptions about what their race means they have to deal with in life.

Let's look at The Cosby Show as an example of this flawed logic. It's a show about a black family living in Brooklyn...but unlike many black families living in Brooklyn in the 1980s, this one was unaffected by those things one might associate with the words "black" / "Brooklyn / "1980s." There was no crack, no poverty, no teen pregnancy (at least not among family members), no domestic violence, no dropping out of school, etc. The family in question was wealthy, well-educated, career-driven, sober, and living happily and comfortably. Very rarely did the show focus on "race issues," though some plot lines were certainly African-American themed.

Everyone has problems...some of those involve being able to afford to feed your kids lunch, and some of those involve feeding yourself lunch after your wealthy parents cut you off financially, but race should not determine whether or not the general public, or society at large, "cares." Nor should anyone automatically assume that being of a particular race (or gender, for that matter) guarantees a specific set of problems.

3) On to the nepotism complaint...the girls on Girls have famous parents. So does half of Hollywood! Even in that Games of Thrones episode my friends and I had watched, Charlie Chaplin's granddaughter plays a role. 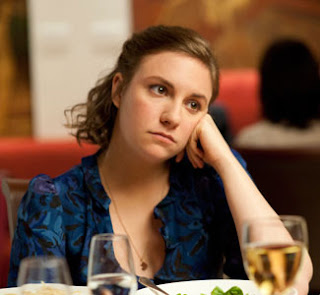 Lena Dunham's mother is an artist/ photographer, not a Hollywood star. Is it really that strange that the daughter of artists would herself become a writer/artist/actress? And let's look at the other famous fathers in question....a playwright, a drummer, and a television journalist. How terrible! At least these ladies are actually doing something that requires talent with their connections, unlike a hoard of Hollywood socialites.

4) Sex and the City, in all of its shoe-shopping glory, was sometimes a frivolous show, and yes, Girls may very well be an up-to-date, twenty-something, hipster version, but the fact is that Girls knows it. The first episode even references Sex and the City. And yes, there are four white women in Girls much like our old friends. But, I don't understand how this is a problem, since it's a) a different show with totally different female characters, b) Girls is self-aware enough to essentially admit its own inevitable comparison, and c) Sex and the City had its empowering, not-so-frivolous, moments too (remember when Samantha shaves her head before her hair can fall out from chemo?).

Furthermore, if Girls is frivolous, then what about all of those reality television shows that feature already-rich people fighting, drinking, getting laid, or making even more money than they already have?

5) So yes, Lena Dunham writes about her own life and casts her own friends...because she writes creative nonfiction (and wouldn't you cast your friends too?). Her film, Tiny Furniture, was based on her own life too. Whether you like her or not, the fact remains that "writing what you know" is not a new concept. And between reality TV that's scripted and vampires/zombies running rampant, is it really so bad to have a carefully plotted television show that is actually based on real-life events?

My So-Called Life was another show that attempted to embody the real-life goings on of "regular" people. In some ways, Angela Chase was a voice for her generation, even if her character was not conscious of that fact the way Lena Dunham's character, Hannah, is. (A woman writing a show that attempts to portray her generation about a character who is writing a memoir that attempts to portray her generation is enjoyably self-reflexive, if you ask me.) Like Girls, the widely acclaimed My So-Called Life dealt not with extreme issues (aside from Rayanne's alcoholism), but with the trials of finding yourself, proving yourself, growing up, being in love, making mistakes, etc.

Now, there are a lot of real-world problems that a TV show could address...like AIDS, rape, war, gangs, genocide, racism, sexism, terrorism....but that is not what Girls is about. I'd like to take this moment to point out that The Office isn't about any of those things either. It's about people...who work...in an office. 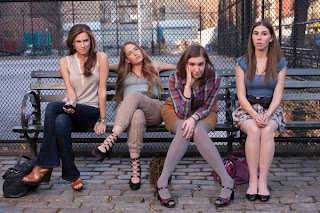 In the first episode of Girls, 24-year-old Hannah gets fired from her year-long, unpaid internship after she tries to turn it into a paying job. At two years out of college, she's worked hard only to be fired for trying to get paid...a very real problem that young people now face. No, she doesn't seem to be in debt from her education. No, she doesn't come from an orphanage in Cambodia. But she still has problems, and she's still struggling, and it's something that a lot of people can relate to because it's something that has entered Lena's real life.

6) Onto the last point...that this show does not accurately represent Brooklyn. Well, see, the thing about NYC is that it's very big, and it has a whole lotta neighborhoods packed inside of it. So no, this isn't Bed-Stuy, nor is it the Hasidic encampment. But let's take a look at Williamsburg of today: a large population of transplanted college graduates (whose parents still help support them financially) striving to "make it" in their chosen field, be it art or fashion or writing or film or music or whatever. In the show, the lead characters are NYC-transplant early-twenty-somethings interested in artistic things. So, how does that not represent NYC of today?

IN CONCLUSION, I think this show hits a nerve with people because it's real....you probably hate it because, in some way, it accurately represents some aspect of your reality (possibly people you dislike), which is part of its whole point. I love that there's a smart, relatable show right now that a) doesn't take itself too seriously, b) features a pudgy, plain-looking girl as the main character [and writer, director, etc], and c) attempts to hold a self-aware mirror to some of the silly things this generation says and does, as well as some of its "grim" realities. It's also supposed to be fun...I mean, really, I can only watch so much decapitation. Go go Girls.
Posted by amy dupcak at 5:08 PM