On Tuesday night, 2.7.12, Amanda Miller performed the dark comedy show she created with Shawn Shafner, Please Don't Let Me Die Alone, at the Magnet Theater in Manhattan. Amanda and Shawn --- who met studying theater at NYU --- created the show together several years ago. They have performed Please Don't Let Me Die Alone on or around Valentine's Day for three years running, with the play gradually evolving, changing shape, and becoming even more potent. This year's show was directed by David McGee.
The symmetrical main characters, next-door neighbors Susan and George, are both hitting major roadblocks in their lives: job-wise and, more so, romantically. Susan was recently dumped, and George has hit a serious slump; with added pressure from their mothers (grandbabies!), both become so desperate that they not only consider throwing themselves out of their windows (literally!) but also jumping into whatever the dating scene may offer. From a matchmaker to Match.com, from speed-dating to blind dates, and from casual sex to pathetic booty calls, the two embark on parallel paths that soon merge when they (woops!) end up in bed with each other! But being neighbors, they, as Amanda put it in our interview, "assume it won’t work out and things will end up awkward and uncomfortable, so they make things more awkward and uncomfortable by looking elsewhere for something that already exists and cannot be replicated." 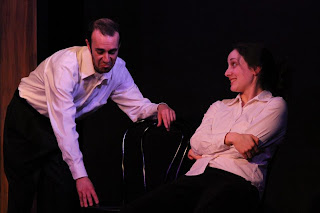 Seasoned actors Amanda and Shawn play every single role in this hour-long production, relying on only a handful of props: two chairs, a sheet, cell phones, and a condom. The actors, and the show itself, are outright hilarious...even in the darkest and most emotional moments. Inherently relatable, the show illuminates our basic human desires (and neuroses!) while poking fun at the absurdity of our culture.

One of the best moments is the speed-dating scene, where Amanda and Shawn play at least six characters each...all of them crazy yet accurate caricatures of people you've probably met (or hope to never meet). Battling rejections, insecurities, and some true-blue weirdos, Susan and George finally manage to come out on the other side...but not without a little guidance from one homeless man, appropriately named Jolly. Amanda and Shawn both play Jolly, who sometimes thinks he's two people! The show constantly maintains momentum, and while it is speedy and rife with characters, there's never a moment of confusion for the audience. An all around fun and enlightening experience.
(bottom photo from Amanda's show by Max Yochum)
Posted by amy dupcak at 1:12 PM