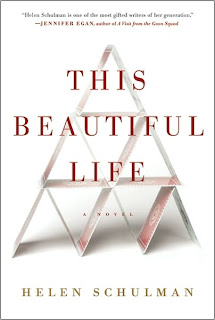 This Beautiful Life
Published in August of last year, Helen Schulman's latest novel is incredibly topical, as it explores the relatively new role that technology/internet/media plays in the family dynamic. The family in question lives in uptown Manhattan, carrying out of those "privileged" lives like only Manhattanites can fully achieve...sending their kids to a selective, top-dollar private school and babying them every step of the way.
Until, that is, fifteen-year-old Jake receives an unsolicited email from a girl he drunkenly made out with at party in her Riverdale mansion, for lack of anything better to do...an email that becomes known as "Daisy Up at Bat," starring thirteen-year-old Daisy and her you-know-what. All it takes for the "child porn" video to reach thousands, possibly millions, is for Jake to forward the email to just one friend.
And thus we have entered a new era, where nothing is private, secrets never go away, blame gets tossed where it doesn't belong, money can get you out of anything, and lives are destroyed from the single click of a mouse. Switching points of view and fully exploring all angles of the incident, as well as its effects on each character's psyche, Schulman's novel raises many questions about how we should navigate the modern world. Also, Helen was one of my fiction teachers in The New School's MFA program, which makes reading the book extra special for me. 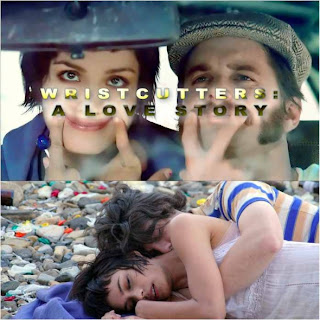 Wristcutters: A Love Story
I'm a little late in viewing this indie gem, but I am so glad I finally did. The 2006 "comedy-fantasy-romance" is about life-after-death for those who commit suicide...a new existence where no one can smile (try as they might), the sky's devoid of stars, and you're pretty much destined to live out your days wishing you hadn't killed yourself.

Such is the case for Zia, who slit his wrists after his girlfriend, Desiree, dumped him. Life post-suicide completely sucks until Zia learns that Desiree also killed herself, leading him on a quest to find her.
Zia sets off with his Russian pal Eugene, and the two pick up a hitchhiker named Mikal --- she insists that she entered this land by accident, since she overdosed unintentionally. Her own quest is to find the "people in charge" and hopefully return to her actual life, but Zia and Eugene aren't sure those people exist.
Hitting more than one bump on the road, their journey gets stranger and stranger, especially when a character named Kneller --- played by none other than Tom Waits! --- shows up. And while Zia is hunting and pining for Desiree, he becomes closer with Mikal, who keeps trying to make this mopey world a little brighter. The ending is super-sweet, and the film is quirky in all the right ways, maintaining a potent sense of emotion while also poking some (mostly harmless) fun at what makes people want to die. 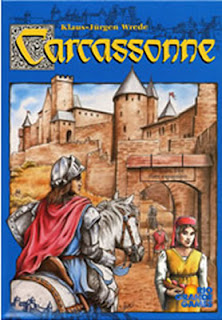 Carcassonne
So, I like games. And this game is so addictive that the boyfriend and I play it almost every day. A "tile-based German-style board game for two to five players," the goal is to strategically place land, castle, road, and cloister pieces in all the right ways in order to earn more points than your opponent.
The game is aesthetically pleasing, puts your spatial/ reasoning/ and even math skills to the test, and the "board" actually looks different every time you play. With expansion counts, it can also get more and more complex. It's especially fun to play with three other people, though one-against-one doesn't take nearly as long. Either way, blast some music, eat some cookies, drink some coffee, spread out on the floor or a table, and place your monks, farmers, knights, and thieves onto the tiles! Then do it again.
happy reading, watching, & gaming,
amy.
Posted by amy dupcak at 2:34 PM