From the Vaults: Drew and the Medicinal Pen. 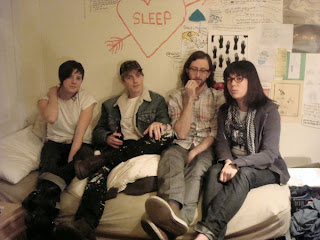 Since my actual website needs remodeling and some of the links to articles and reviews I wrote for BRM are currently expired or in the process of migration, I will occasionally post work "from the vaults" --- all in the name of making sure certain articles still have a place in the beautifully chaotic world of the internet.

I interviewed Drew, Anna, Missy, and Zach in Brooklyn back in the late fall of 2009 (I think!). The band has since gone through many changes and mutations --- resulting in other musical and artistic endeavors --- but I'd like to think that I captured them in a particular moment in time, a moment worth remembering. . . . .
Drew and the Medicinal Pen began as Drew Henkels’ solo project, but eventually evolved into a full band; first when he lived with bassist Anna Morsett on McKibbin in Brooklyn, and then with the addition of Missy Liu on violin and a host of instruments, and drummer Zach Arlan. Combining their diverse musical backgrounds as well as an overlapping love of punk rock and Neutral Milk Hotel, they began creating organic, uplifting songs with darker undertones.
Of this dichotomy, Drew explains, “They’re melodic and hopefully enjoyable to listen to, but they’re not typical pop songs because they’re full of some harder things to talk about and some smarter things to think about and that’s what gives it its real content, its real grit; the poppy fun sound is an optimism embedded inside all of us, which has come out more playing with Anna and Missy.” He continues, “That kind of makes this pill a little more swallowable and digestible, it’s good because the content hopefully gets through to people later. You listen to the song and you’re bobbing your head but then you pause and say, ‘Wait, what did he just say?’ Stop and think about the lyrics twice.” Anna adds that the lyrics are “rooted in something you really care about.”

The band released their album, dream, dream, fail, repeat, on their own label, which is stationed in Drew’s cluttered, art-covered bedroom in Brooklyn. The epitome of DIY, the album was recorded in a homemade space (“The Sex Dungeon”) in a warehouse in West Philly. They camped out there during the dead of winter, with no heat or hot water, cooking on a hot plate, and going back and forth from New York to Philly for several days at a time. Discomfort aside, Drew assures, “This just felt like where this record needed to come out of.” A creatively rich environment, they smashed 200 glass bottles during the end of “Sleepy Don’t Cry,” sang through a heating vent for “Hey Chanae,” and also shot off fireworks for sound effects.
The DIY ethos extends to making posters, stickers, buttons, t-shirts, album cover art, and even films that add to the thrill of performances. Drew explains, “It’s all just kind of in between reality and dream world; there’s this whole plateau I’ve been building of images and thoughts and fragments of sentences and films and dream logs, and often these show up in lyrics.”
The ultimate dream is to quit their day jobs, live off the music, tour full-time (“The van can only go so far,” says Missy), and share their songs with as many listeners as possible, but they’re also content to continue playing house shows and hanging letters from fans in their “office.” However, for a little extra cash, they do have a plan to sell raffle tickets for fans to see Anna’s boobs; “you’ll need to buy two to see both boobs!”
All kidding aside, the band loves where they are right now. While it would be wonderful to be rock stars, Drew assures that they’re perfectly happy playing house shows, art shows, and basements, and thus sharing the music on a personal level. “If you make something you want someone to hear it. But at the same time, I have a lot of issues with commercialism. I do like that we have build up and momentum.” Anna adds that the goal is to sustain themselves from the output of creativity, as well as to “rise above where we’ve been and try to jump over it.”
It doesn’t hurt to make some friends along the way, like Brent Green, who puts the band up on his farm whenever they come through Pennsylvania. Drew says, “He's a filmmaker, but also one of my absolute favorite lyricists.” They’ve also been inspired by bands they’ve shared a bill with, such as Endless Mike and the Beagle Club. The four voices of Drew and the Medicinal Pen will continue to sing and maybe even scream their way around the country, state by state and house by house, bringing their own talents and emotions to every chord strummed. “That’s when it’s really transcendent,” Drew says, “and really worthwhile.”
(photos by a.dupcak)
Posted by amy dupcak at 10:55 AM

Email ThisBlogThis!Share to TwitterShare to FacebookShare to Pinterest
Labels: article, drew and the medicinal pen, folk, from the vaults