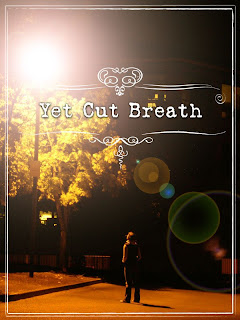 Anna Morsett provided gorgeous "ooh's" and "aah's" as backup vocalist/bassist for Drew and the Medicinal Pen, based in Brooklyn. But now, Anna has taken the reins on a new project for which she sings, writes, and plays bass and guitar. Along for the music-making ride, Yet Cut Breath consists of former Medicinal Pen member Missy Liu on  violin; engineer/producer John Swartz on cello; man of many bands (like The Kissing Club and The Stevedores) Jake Miller on electric guitar, banjo, and harmonica; and Yahote Kokayi on drums (for the recording). Live shows might reveal slightly varying arrangements depending on the day, but the beauty of Yet Cut Breath is always carried forth by Anna's stand-alone voice.

The band describes themselves as "a collection of acoustic thoughts that take place in the small spaces of morning, inside light fixtures and up against bathroom tiles. Turbulent and tender songwriting driven by cello, violin, guitars and a stormy voice that will leave you a little cut up." No description could be more apt. This seven-track debut, Hinges, showcases Anna's range, with songs that soothe and sadden amidst those that pack a fevered and glistening punch. Emotive songwriting is at the core of completely organic instrumentation, creating a muti-layered album worthy of a spot on any best-of list.

The album opens with "Kindness," for which David Sosnow directed a live music video where the members played their parts in separate sections of an abandoned hospital wing. Here, the violin and cello add a rippling texture to the long waves of Anna's vocals, and the whimsical song moves through carefully plotted moments of neo-classical elation. The strings go strong again at the very start of "Terrified," which is among the punchier tracks. Anna's voice is at its most vigorous layered atop a sweeping cello and subtle cymbals. The song ends with all of the instruments tripping over each other, falling apart until "Gate" tiptoes in. This track, and the finale "Sunday Dark," which was recorded live, are the album's most hushed, and Anna tends to perform them solo during live shows. But smack in the middle of Hinges, we've got the energetic and at times bombastic "Yet Cut;" perhaps the perfect example of the band's soft-to-loud, simple-to-complex dynamism.

"Through my Teeth" begins in a fairly classic folk-rock fashion, but soon expands and spreads its wings, rising again and again. "Tied" might be a personal favorite, as it begins with a slightly less "pretty" coagulation of sound. Once again, Anna's voice commands attention, coming at listeners in an almost restless fashion as the strings and guitar explode and then linger in the song's final fifteen seconds. Comparisons to other bands, especially in Brooklyn, can't even begin to explain the  authenticity of Yet Cut Breath.

yetcutbreath. from David Sosnow on Vimeo.
Posted by amy dupcak at 11:20 AM