So I'm still not in Austin, but here's a replay of some writing I did for last year's festival! 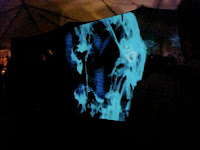 At their official Green Owl showcase in the Beauty Bar backyard, Grandchildren debuted a new aspect to performances. Setting up a screen between them and the crowd, they projected a series of moving images to correspond to each interlinked song. Created mainly by primary songwriter Aleks Martray, the projection turned their set into something purely magical and artistic, which aptly represents the band’s aesthetic and visual art origins.

Later in the night, after I saw Moonrats, ate some tofu (finally!) and also had a Bill Murray spotting (!!!), I ventured with Grandchildren in their trusty van to the ranch that Green Owl provided not only for the bands on the label, but also as a place where SxSW-goers could come late at night to hear music, away from the claustrophobic downtown streets. With the idea that “great music can be sustainable,” a brightly painted and converted school bus that runs on veggie oil was making trips, until 5 am, from downtown Austin to the 35-acre “Rockin Y Ranch” at 7600 Still Ridge, equipped with a pool, tire swings, goats, a barn for shows, and a slew of awesome people. 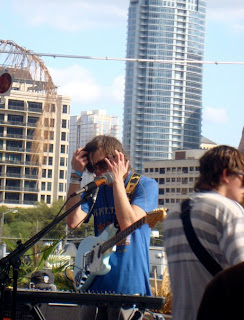 Outernational, from NYC, offered both a ska and Spanish feel to fighting songs and were purported to be, by Tom Morello himself, “a world-music Rage Against the Machine.” Pomegranates, from Ohio, were carefree and fresh-faced, churning out surfy, mildly psychedelic tunes that were harmless and easily digestible, but also very well constructed. Something about those boys and their songs just felt right, in all their youthful flurry.

Phantogram, consisting of guitarist Josh Carter and keyboardist Sarah Barthel, with their electronic music and evenly paced, mechanic beats, was quite a departure from most of the music I had been hearing at South by. Barthel’s voice glimmers and slides easily along synths and front-and-center guitar (“You Are the Ocean” is especially poignant, and their album, Eyelid Movies, is  emotive, electronic bliss). All the way from the UK, Lovvers, while somewhat awkward in appearance, performed punky, poppy songs that settled into your bones.
Fader Fort: Local Natives & Freelance Whales 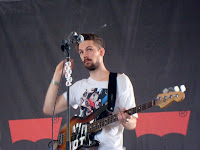 On two separate days, I caught Freelance Whales and Local Natives, both on NYC’s French Kiss label. The former is a cheery indie band from none other than Queens, although their music seems much sunnier (and less cynical). Poppy and sugary-sweet, female member Doris Cellar (who also makes solo music) played a traditional wooden harmonium sitting on a drum seat, which she pumped and played while also manning a bass guitar. Freelance Whales makes use of a wide array of other odd instruments, such as a waterphone, bing carbon telephones, and glockenspiel, to create their humbly and charming pop songs, which they take turns singing, or sometimes emit together.

Local Natives are a very cool Los Angeles based five-piece with Afro-beat elements, soulful vocals, and a slight Paul Simon undercurrent, but they’re also very tuned into sounds emerging throughout the country’s indie underground…this idea of turning back time and becoming more organic, more inspired, almost tribal. Songs such as “Sun Hands” and “Airplanes” definitely stand out.
Primo's Showcase, on a windy day 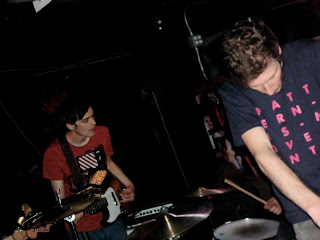 Primo’s provided a steady stream of music, with bands performing both inside the bar and outside under the tent that threatened to fall down due to winds.

I caught The Name, a fun and engaging three-piece who sounded like Nirvana gone Brazilian; Beach Fossils, a Cali-tastic (but actually from Brooklyn) band of neo-hippies, the longest-haired member of which ecstatically banged drums to up the ante of their ’60s garage dreaminess; When Dinosaurs Ruled the Earth, a seven-member band of mostly bearded dudes in winter hats who are so grunge it hurts in the best way possible, and with almost everyone in the band on guitar; and DD/MM/YYYY from Canada, who were so hardcore about playing their punky-synthy-delightfully cacophonous music that one of the keyboardists literally smashed his face into the keys. And a saxophone was also a welcome accessory to the riot!
words&photos by a.dupcak.
Posted by amy dupcak at 9:17 AM

Email ThisBlogThis!Share to TwitterShare to FacebookShare to Pinterest
Labels: bands, concert, from the vaults, SxSW