Music Video: "Song Yet to be Sung" 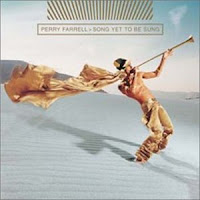 Perry Farrell (real name Peretz Bernstein) has had some ups and down since fronting Jane's Addiction and organizing Lollapalooza. But, throughout all of his projects and albums, I've always considered him interesting and imaginative.

After fronting both Psi Com and Jane's Addiction, Farrell formed Porno for Pyros and Satellite Party, then put out a solo record called Song Yet to be Sung, the lyrics of which were inspired by the Kabballah. He delved into scarification, environmentalism, relief efforts, surfing, mysticism, and many aspects of underground, alternative culture, which all crop up in his personal appearance, music videos, album covers, and lyrics.
The title track of his solo album, released in 2001, is perhaps my favorite Perry-creation, and the video  perfectly suits the song. Surreal and magical, it takes place in a desert, involves a wise, symbolic child, and then ends with fire poi, nudity, and members from the "Mystic Family Circus" dancing with a carefree Farrell. He's a great example of modern times coalescing with ancient philosophy and nature, and this song is bursting with life; I've been listening to it for ten years and, for me, it never gets old.
Posted by amy dupcak at 6:00 PM