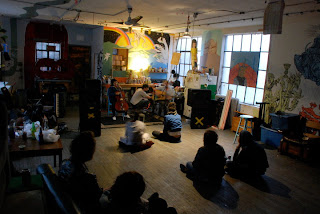 Save this, save that, I know I know --- who has money to contribute to starving kids let alone an indie arts venue (or a drunk driving service, ahem)? But let me just say that Silent Barn needs and deserves your help.
Unfortunately, and much to my own personal disgrace, I have not yet been to Silent Barn, in Queens. Many friends and acquaintances have performed there, or are part of the fabric of its existence, and I have been meaning to catch a concert, performance, reading, or video game within its walls for some time. With a recent robbery that left the place in shambles, though, it looks like I'll never get the chance to see the space as it has existed for the past several years.
The massive theft that Silent Barn just experienced is forcing the space to temporarily close, but they're taking an optimistic approach by looking at this as a chance to find a safer locale in another part of NYC. The goal now is to raise 80 grand --- steep, but hopefully do-able --- in order to "ensure the viability of The Silent Barn as a permanent all-ages venue for independent and experimental music, games, and art." With that, they're looking at a new and improved sound system, fire safety, better lighting, and other necessary renovations. 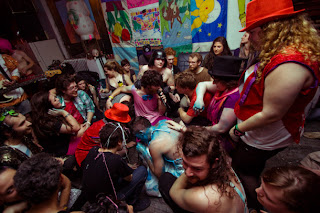 One project with which I'm fascinated, and one that's had a long residence at Silent Barn, is Babycastles --- an independent video games arcade. Though I did saunter into a Babycastles showcase during the Northside Festival this year (at 285 Kent), I never actually got to play the awesome games. The deal is (or, was) that you could play all the games at Silent Barn for free after paying the door fee to catch whatever show. Rad.
Here's what the Silent Barn people have to say about their venue:

The Silent Barn is an immersion into the art of New York City as it lives.  It's a double-floor music venue inside of a kitchen, an independent video games arcade, an art theater & performance space, a party surveillance system, a zine library, a museum of gigantic murals, and a home for Castle Oscar.  Founded in 2004, The Silent Barn is now grandfather to a beautiful re-emergence of similar spaces across Brooklyn, and a quintessential model for all-ages DIY art and music culture in America.  It resides proudly alongside Flux Factory and the Museum of the Moving Image as a rare contemporary art institution in Queens, New York.  It has long been the headquarters of both Showpaper and Babycastles, young and booming art institutions in NYC.   It has  birthed the careers of The Dirty Projectors, Dan Deacon, Future Islands, Deerhunter, Teengirl Fantasy, Vivian Girls, Real Estate, The Black Lips, Pictureplane, and many many others.,

I for one will most definitely be supporting and enjoying the second life of Silent Barn, and I hope that venues like this one, which has inspired others throughout the boroughs, can live long, prosper, and not. get. robbed.
SUPPORT SILENT BARN!!!
Posted by amy dupcak at 2:49 PM